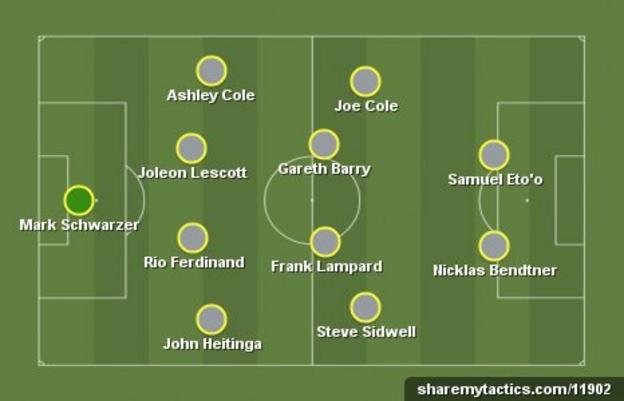 They have almost 1,000 caps, league titles and European cups between them, but are available on free transfers.

BBC Sport has picked a strong team from the 155 out-of-contract top flight players, but what do you think of our line up? Can you better it?

Let us know your XI through the comments section at the bottom of this page or via #bbcsportsday on Twitter. The best comments will go in Sportsday Live.

Australia goalkeeper Schwarzer, 41, spent most of the 2013-14 campaign twiddling his thumbs on the Chelsea bench, watching first-choice stopper Petr Cech continue to impress for the Blues.

But when Cech missed their run-in with a shoulder injury, Schwarzer showed he could be relied upon at the highest level. The ex-Middlesbrough and Fulham player, who moved to Stamford Bridge last summer on a one-year-contract, made crucial saves in the clean sheets at Atletico Madrid and Liverpool.

Fulham defender John Heitinga has a CV which would make a large percentage of footballers go green with envy. The Dutchman has represented his nation at two World Cups - including the 2010 final where he was sent off as they were beaten by Spain - and three European Championships, while he counts Ajax, Atletico Madrid and Everton as his previous clubs.

The 30-year-old, who missed out on a place in Louis van Gaal's Netherlands squad for this summer's World Cup, made a six-month switch to Fulham in January, but was unable to save the Cottagers from Premier League relegation.

Stat attack: The Dutchman netted one goal in just 14 Premier League games for Fulham last season after only managing two in 115 with Everton.

In July 2002, Rio Ferdinand became the world's costliest defender when he moved from Leeds United to Premier League rivals Manchester United for £30m.

Now, after 454 appearances and 10 trophies, the 35-year-old ex-England international is available for nothing after deciding to leave the Old Trafford club.

The England international's farewell on social networking site Twitter signalled the end of his City career - five years, two Premier League titles, one FA Cup and one League Cup after a £22m move from Everton.

What the 31-year-old centre-back has not told us in 140 characters or less (or more) is where he will be heading next season.

Stat attack: Since Lescott moved to Manchester City in the summer of 2009, the club have won 66% of the Premier League games in which he has featured - compared to 55% when he hasn't.

After announcing his England retirement earlier this month, Ashley Cole was described as "one of the greatest" players in Premier League history by Match of the Day pundit Alan Hansen. And few would disagree with this assessment.

However, the 33-year-old left-back says he is set to leave Chelsea after winning nine trophies - including the 2009-10 Premier League and the Champions League in 2012 - in eight seasons at Stamford Bridge.

Fulham fans had few things to cheer during a season which saw their team lose their Premier League status after 13 seasons. However, the form of ex-Reading, Chelsea and Aston Villa midfielder Sidwell was one.

The 31-year-old had said he was willing to help the Cottagers bounce back from the Championship, but was one of nine names on their lengthy released list.

"Until I've spoken to a Fulham official I can not comment. But what I can say is that I'm humbled and touched from all your messages," he tweeted afterwards.

Stat attack: Sidwell had a hand in more Premier League goals for Fulham in 2013-14 than any other player (seven goals, two assists).

Chelsea without Frank Lampard is almost alien to the younger generation of Blues fans. But it might become a reality this summer.

The 35-year-old England midfielder is out of contract following 13 years at Stamford Bridge, and is set to hold talks with Chelsea after the World Cup.

Lampard, who joined from West Ham for £11m in June 2001, says he is relaxed about the situation, but it leaves plenty of Blues fans in an uneasy suspense.

Stat attack: Lampard has made the most appearances (429), scored the most goals (147) and provided the most assists (90) for Chelsea in the Premier League.

England midfielder Barry's career at Manchester City effectively came to an end last summer when he was sent out on a season-long loan to Everton.

But, after a season where he was the fulcrum of Roberto Martinez's eye-catching side, the 33-year-old's talents have reportedly alerted a number of other Premier League to his availability on a free transfer.

West Ham hero Joe Cole's return to Upton Park in January 2013 was treated like the return of the prodigal son. But the ex-England midfielder failed to resurrect his career in the way which he - and thousands of adoring Hammers - hoped.

He struggled with injuries after signing an 18-month deal from Liverpool, making just 19 starts before boss Sam Allardyce released the 32-year-old on Friday.

Stat attack: This season Cole drew level with Roy Keane on 366 Premier League appearances while the former England man also made it to 80 goals involvements in his Premier League career (45 goals and 35 assists).

Despite Jose Mourinho's jibes about his age, 33-year-old Cameroon striker Samuel Eto'o insists he is still physically fit enough to play at the top level.

Eto'o scored 12 goals in his short spell at Stamford Bridge last term, after signing a one-year deal following his move from Russian side Anzhi Makhachkala.

Stat attack: The veteran striker averaged a Premier League goal every 145 minutes in the 2013-14 season - the best rate of any Chelsea player.

Denmark striker Nicklas Bendtner was mocked for telling a newspaper in his homeland that he wanted his next club to be "Real Madrid or Barcelona".

Now it is more likely to be Crystal Palace or Burnley following his exit from the Gunners, for whom he has made just one Premier League start in over three years.

Stat attack: Of players to score 20 or more Premier League goals for Arsenal, the Dane boasts the fifth-best minutes per goal rate (190.58), bettered only by Henry, van Persie, Wright and Adebayor.