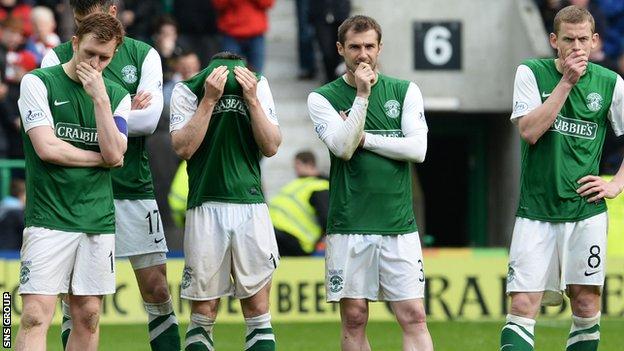 Former captain Pat Stanton has warned Hibernian may struggle to make a swift return to the Scottish Premiership.

Following relegation in the play-off final on Sunday, the Easter Road side will face Hearts and Rangers in the Championship next season.

"On the evidence of recent form there is nothing to suggest Hibs can be a force in that league," said Stanton.

"Going by what I've been watching at Easter Road, we've no reason to think we'll jump back up again."

Since the inception of the Scottish Premier League in 1975, Hibs have been relegated twice, bouncing straight back in 1981 and 1999.

Dundee made an immediate return to the top flight this season but the second tier will have a completely different complexion next term, with Rangers entering as League One champions and the capital clubs being demoted.

It means three of Scotland's five best-supported teams, in terms of average gates, will be fighting it out with seven other sides for two possible promotion places, with only the champions guaranteed the step up.

"From what I see presently, it will be very difficult for Hibs to come up," added 69-year-old Stanton, who spent 13 years as a player at Easter Road and had a brief spell as manager in the early 1980s.

"You've got Rangers and Hearts and there will be one or two other teams. Hamilton have come up and they deserve it.

"I'd love it but it will be a surprise to me if Hibs come up in the first season or two."

Capped 16 times for Scotland, Stanton was a complete midfielder, hard in the tackle, stylish on the ball and with an eye for goal.

And he is dismayed by those wearing the green and white of his former club, having witnessed the play-off defeat by Hamilton Academical on Sunday.

Accies came from two goals behind after the first leg to consign Hibs to relegation after penalties in the second leg.

"I was at the game and at no time did Hibs look like they could win it," he told BBC Scotland.

"There has been a steady decline in the standard of players at Easter Road. This didn't happen in the last few weeks, this has been going on for two or three seasons.

"If you'd asked the fans, they'd have told you something is going to happen here unless it's addressed. But it's been allowed to go on and that's how we find ourselves in this situation.

"It's not just appeared on our doorstep; it's been coming for a long while."

Manger Terry Butcher, who took over in November, has indicated that he intends to remain in charge, with the 55-year-old contracted until the summer of 2016.

And Stanton believes Hibs should stick with the former England captain, despite a woeful sequence of results in 2014 leading to the drop.

"They must give him a chance," he said. "He's come in at a difficult time."