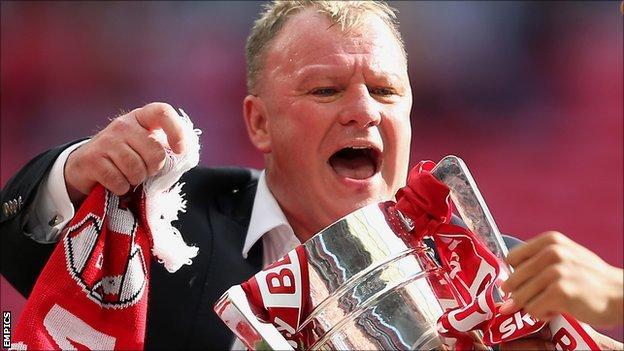 Rotherham manager Steve Evans has revealed he demanded his players show desire in the second half of their League One play-off final.

The Millers trailed 2-0 at half time to Leyton Orient but fought back to force extra time and win on penalties.

"My assistant said they would need me to dig them out of the trenches and put them on top of a mountain," Evans said.

"I spoke about what it meant to them, their families. You have to have the desire, the fight and the hunger."

The victory was Rotherham manager Steve Evans's first at Wembley, having never managed a club at the national stadium before.

The 51-year-old said some words of advice from former Preston, Derby and Nottingham Forest manager Billy Davies proved to be crucial for his team talk.

"We started the game well and were on top but then lost our shape and discipline and looked a bit ragged," Evans said.

"That is not like us and it was pleasing to get them in at half time.

"Billy rang me on Sunday morning, and he has been successful at Wembley.

"He said that late on it is not about tactical nous, but a real hunger and desire within your heart to win a football match. That is what I spoke about."

Evans has guided Rotherham to back-to-back promotions and the South Yorkshire side will be back in the Championship for the first time since 2005.

The former Boston boss joined the Millers from Crawley in 2012 and says he always thought he and the club had the potential to be successful.

"When you are in non-league or League Two and say you are good enough to manage in the Championship you just get people knocking you because they don't want you to do it," he said.

"You need to retain the inner belief.

"When I left Crawley Town two years ago to come here I did have the belief that this day would be here and that we could go to the Championship."