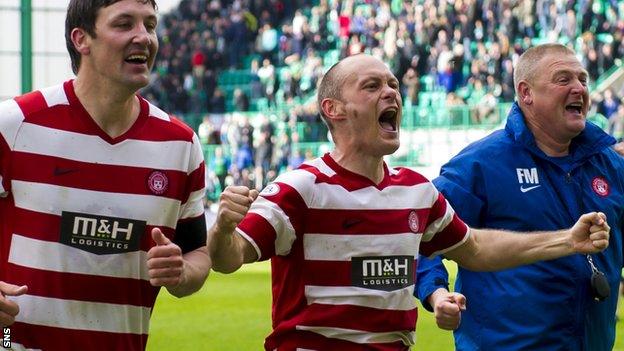 Hamilton manager Alex Neil says his present squad deserves the chance of performing in Scotland's top flight after their play-off win over Hibs.

Accies came from two goals behind after the first leg to consign Hibs to relegation after penalties.

"We will try to strengthen, but they'll get their crack because they deserve it for what they've managed to do," Neil said of his players.

"I thought, over the piece, we were worthy winners."

Goals from Jason Scotland and then Anthony Andreu in stoppage-time gave Accies, who had finished runners-up to Dundee in the Scottish Championship, the chance to win promotion in a shoot-out at Easter Road.

"I said it after the first game, I've never written this group off," Neil told BBC Scotland. "I didn't think it was a 2-0 game.

"I said that, if we got the first goal, they would become a bit jittery. The bottle was shown all season. We've bounced back and it was magnificent. I think we showed we are the better side."

Veteran former Trinidad & Tobago striker Scotland, 35, had not been considered fit enough for the first leg but lasted the full 120 minutes in Edinburgh.

"Generally, when Jason plays, he gives us his all for 60 or 70 minutes, but I couldn't take him off he was that good," said Neil.

"He was magnificent in the game, his strength, his power, his experience.

"They all deserve their crack at the big time now and that's what they've got next season."

Midfielder Darian MacKinnon was playing junior football for Clydebank until two seasons ago and now gets his chance of playing in Scotland's top flight for the first time at the age of 28.

He praised player-manager Neil for having "made us all better players".

"It is great to come back from the first leg as we didn't do ourselves justice, but to a man we were magnificent today and it was a great feeling at the end," he said.

Defender Ziggy Gordon is the latest product of Accies' youth system to follow James McCarthy and James McArthur into the big time.

"It's a day I'll never forget," said the 21-year-old. "I'll run my heart out in every single game and it's great to get the reward for it.

"It's really special for me. I've been here for 11 years since I was a 10-year-old. All the hard work shows today: you work hard and you get the rewards, end of!

"Wherever I end up, hopefully it's at the highest level, I owe everything to the club."

Experienced Accies defender Martin Canning said: "If you knew you were going to win it that way, there's no better way to win it.

"To go up automatically would have been great, but to go through what we have in the last few weeks and come to a huge club like this and to be 2-0 down and turn it round like we did, I'm really proud of every single person at the club.

"I thought it was a monumental effort and just rewards for a great season for us."