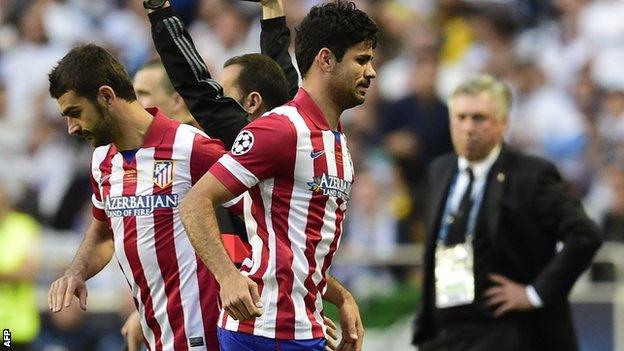 Atletico Madrid manager Diego Simeone admitted he made a mistake in picking Diego Costa for the Champions League final.

Costa was substituted with a hamstring injury after only nine minutes of Atletico's 4-1 defeat by Real Madrid.

The Spain striker, injured against Barcelona a week earlier, had scored 36 goals this season for Atletico.

"No doubt the fact Diego played was my responsibility and I made a mistake," Simeone said.

The Brazil-born forward looked uncomfortable in the opening phase of the match, and was replaced by Adrian Lopez.

"I didn't want to lose time in this game playing with one player less. It just couldn't be," added the Atletico manager.

Costa, 25, was capped by Brazil in two friendlies, but he decided to switch allegiances through naturalisation, having lived in Spain since 2007, and made his debut for his adopted country in February.

Simeone was unsure whether or not Costa's participation for the World Cup holders in the tournament, which begins on 12 June, could be in doubt.

"I don't know if he'll have a problem [playing in the World Cup]. We'll have to talk to him and the doctors and see.

"This match doesn't deserve a single tear," said the Argentine.

Simeone said he was proud of his side's efforts and believes Atletico can continue to compete with the biggest clubs in Europe.

"When you give everything you cannot ask for more," he added. "There is another team and other players out there and that is football.

"Now we have to rest, relax and prepare ourselves to compete and bother the big teams again next season.

"This will make us better. It gives us the chance to keep improving and now the rest of the world knows that Atletico can compete."

Simeone ended the game enraged, entering the pitch to confront Real defender Raphael Varane after the Frenchman appeared to kick the ball towards the Atletico bench.

"He booted the ball towards me and I got annoyed. That is why, he is young. I didn't think it was a good reaction and mine probably wasn't either."