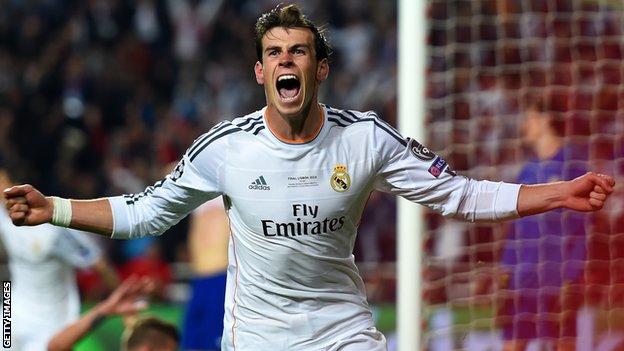 Bale, 24, scored Real Madrid's crucial second goal in their 4-1 win over Atletico Madrid in the Champions League final in Lisbon.

Flynn, who oversaw the forward's early progress with Wales, believes the world's most expensive player can only get better

I made a statement about nine years ago, after meeting up with Gareth, he would be the best player in Europe before he was 23 and he's close to that

"Where is the next step in four or five years? It's hard to say."

Bale, who joined Real from Spurs for a world-record £85.3m last summer, scored the decisive extra-time goal which gave his side the lead over city rivals Atletico.

It was the second time the Welshman had scored the winner in a cup final in his first season with Real, following a goal in the Copa del Rey against Barcelona.

Flynn handed Bale his Wales Under-21 debut as a 16-year-old in a friendly against Cyprus at Port Talbot in May 2006.

Later that month the then Southampton player became Wales' youngest senior international when he came on as a substitute for John Toshack's side in a friendly win over Trinidad and Tobago.

Former Leeds and Burnley midfielder Flynn had predicted a bright future for the Cardiff-born youngster during his time in charge of Wales' intermediate teams.

"I made a statement about nine years ago, after meeting up with Gareth, he would be the best player in Europe before he was 23 and he's close to that," Flynn told BBC Five Live's Sportsweek.

"Statements such as that can come back and haunt you but not with a player like Gareth. He is special without a shadow of a doubt.

"When we first saw him at a training camp down at Swansea, one thing we couldn't believe was that he was playing at left-back.

"We felt he had to play further forward and more up front.

"I remember [former Wales and Real Madrid manager] John Toshack saying, 'I'm going to play him up front against Russia', and he was a sensation.

"We always knew he had it. When you've got that unbelievable belief in your own ability, which Gareth has, there's only one place for him and that's on the big stage."

Bale has been included in Wales' squad for the friendly against Netherlands on 4 June, their final match before the Euro 2016 qualifiers begin in September.

And Flynn, part of the Wales squad which reached the European Championships quarter-finals in 1976, believes Bale and the current side can qualify for the finals in France in two years' time.

"Looking at what we've got, I think we will qualify," added Flynn, who was in caretaker charge of the national side for two games in 2010.