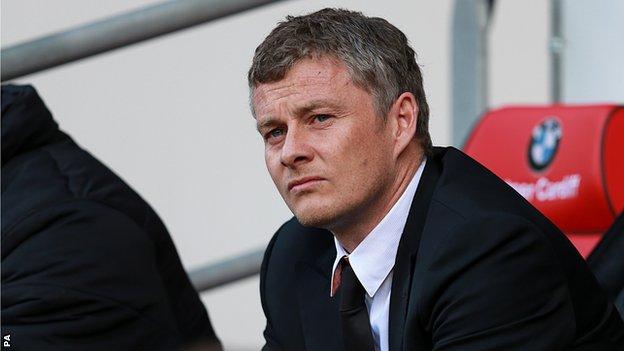 The Bluebirds lasted just one season on their return to the English top flight and finished bottom of the league.

Striker Javi Guerra, 32, and midfielder Guido Burgstaller, 25, have been added for their Championship campaign.

"These two signings are a statement of intent from a club looking to push for promotion next season," Solskjaer said.

"It was a tough season for Cardiff City in the Premier League, but we enjoyed being able to play against some of the best teams in the world.

We want to... bring in players to demonstrate our ambitions and intent to the fans and the players already here

"To have the chance of getting back to the top flight and to grow as a club we'll need quality players who can help us achieve our ambitions."

Austria international Burgstaller has been signed from Rapid Vienna, while Guerra has joined from Real Valladolid - both men joining on three-year deals.

"I'm very pleased that we've signed Guido. He's a dynamic, attacking midfielder with pace and power. What's more he has a fantastic attitude and a real appetite for football," added Solskjaer, speaking to the Cardiff website.

"It's no secret that we lacked goals in the team last season and it's a fact that if we are to compete at the right end of the table in the Championship, we'll need players who can find the back of the net.

Cardiff have also offered a new contract to midfielder Don Cowie, while the Bluebirds still hope to persuade Fraizer Campbell to stay at Cardiff City Stadium as the striker has a release clause in his contract following relegation.

But Solskjaer is still seeking to strengthen his squad further for next season.

"We'll continue working to bring in other players to add to the squad and hope to be able to announce more names in the weeks ahead," Solskjaer added.

"We want to conduct our business as soon as possible, bringing in players to demonstrate our ambitions and intent to the fans and the players already here, showing everyone that we want to challenge for promotion next season."