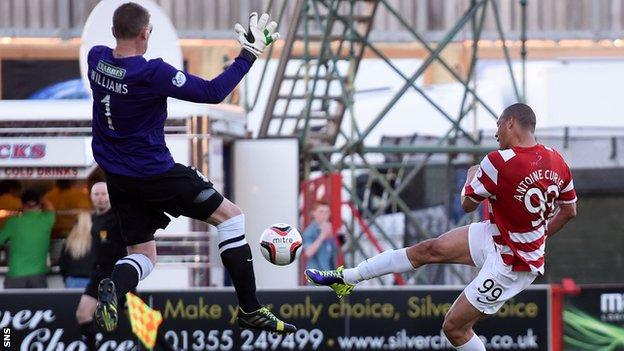 Hamilton boss Alex Neil has encouraged his players to draw inspiration from Liverpool's 2005 Champions League win ahead of Sunday's trip to Hibernian.

Neil's side trail 2-0 at the halfway stage of their Premiership play-off.

Liverpool recovered from a 3-0 interval deficit to beat AC Milan on penalties and lift the European Cup nine years ago.

"That is just one example I will be pointing to, but the best model we can aim to copy is our own," said Neil.

"I have reminded the boys of the games in the past where teams have come through adversity to win.

"Look at Liverpool in the Champions League final against AC Milan. They were 3-0 down at half-time against a world-class team but managed to fight back and get their hands on that trophy."

Hamilton had periods of possession and pressure but found the hitherto struggling Edinburgh side difficult to break down.

However, Neil highlighted his team's ability to get goals they need as another reason for optimism.

"We had to have an eight-goal swing on the last day of the season to have any chance of beating Dundee to the title and did our part with that incredible 10-2 win over Morton," he said.

"Had Dundee slipped up against Dumbarton, we'd have finished off the most incredible turnaround in football.

"At Cowdenbeath away back in November, we were 2-0 down at the break and came back to win 4-2. We played them again a couple of months later at our place and were four down at half-time but pushed them close with three goals in the second half.

"So we are more than capable of bouncing back after we have been knocked down. We need to take inspiration from the fact we have already done this sort of thing this season."