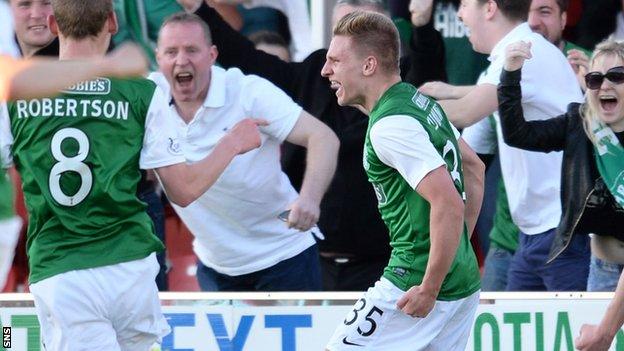 Cummings' double against Hamilton Academical has put Hibs in control of their Premiership play-off final ahead of Sunday's second leg at Easter Road.

"It's impossible to keep his feet on the ground," said Butcher. "His head is up in the clouds.

"But we have always thought he has a big future."

Cummings' double ensured the Leith side's first win in 14 games and edged them closer to preserving their Premiership status.

He had made 16 appearances for the first team without scoring until those two vital goals at New Douglas Park against the Scottish Championship runners-up on Wednesday, but Butcher says the player's self-confidence is uncontrollable.

He's a remarkable boy who has had a difficult upbringing, but it has made him hungry

"He would be bubbly and bright no matter what. But the other lads are pretty strong with him and don't let him go too far with it.

"He has got a cockiness about him, but I think it is a confidence in his own ability and, when I see him go about his work, I always feel he will do something - and he generally does."

Cummings grew up a supporter of Hibs' city rivals, Hearts, and was on the books at Tynecastle as a youth before his chances there were ruined by injury.

Now, while his former club are heading for the Scottish Championship after finishing bottom, it appears that Hibs will avoid joining them there thanks to his midweek goals.

"He's a remarkable boy who has had a difficult upbringing, but it has made him hungry," added Butcher. "Ever since we came into the club, we have admired and liked him."