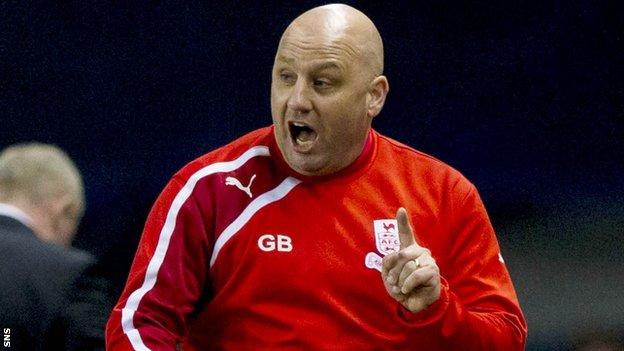 Gary Bollan has been handed a contract extension until May 2016 after guiding Airdrieonians clear of relegation trouble in Scotland's League One.

The 41-year-old former Livington manager took charge in October with the side bottom of the table.

But the Diamonds ended the season unbeaten in their final eight games and finished sixth.

Chairman Jim Ballantyne told his club website: "To his credit, Gary feels that we have only just started."

"Since Gary joined us, there has been a slow and steady improvement in nearly every aspect of the club's performance," said Ballantyne.

"And it was important that, if we want this to continue - and we certainly do, we secured the services of our manager as soon as possible.

"We feel we have started a journey that the board and the fans believe in and we would like the manager to take us to the next level."

Bollan, who was sacked by Livingston in February 2012 after leading the club to the Second Division title the previous season, said he hoped to repay Airdrieonians' faith in him.

"It took a while to make the changes I wanted and there is still much I want to do," he added.