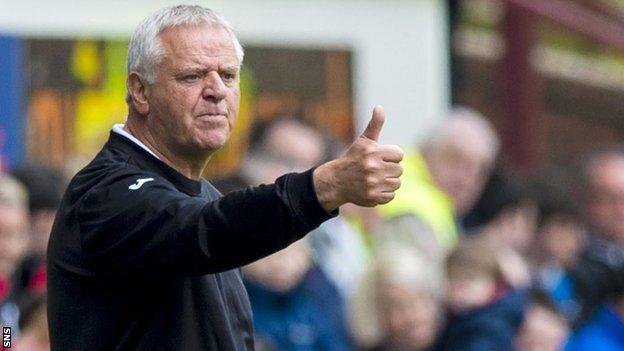 Manager Jim Jefferies has revealed that Dunfermline Athletic will remain full-time next season despite missing out on promotion to the Scottish Championship.

But former Blackpool midfielder Stephen Husband has been released.

And the Fife club admits it will be difficult to agree terms with experienced defender Danny Grainger.

"We are still going to be a full-time club and they will know that next year is a big year and we must go up," Jefferies told his club website.

Rangers will not be in the league, but teams are not going to make it easy for us

Dunfermline missed out on promotion after losing their play-off final to Fife neighbours Cowdenbeath in a season when they came out of administration.

It means they will miss out on financially lucrative meetings with Rangers, who were runaway winners of League One, relegated Hearts and derby rivals Raith Rovers and Falkirk next season.

However, they should start as favourites for the title along with relegated Morton, who are also remaining full-time.

"Rangers will not be in the league, but teams are not going to make it easy for us," said Jefferies.

"We are a year older, we finished in second place by 12 points clear, so we know what we want to go with to get up."

English 24-year-old Callum Morris has decided not to extend his two-year stay at East End Park, while Jefferies does not expect Grainger to remain either.

"Danny loves it here and knows that we are interested in him," he said of the 27-year-old former Gretna, Dundee United, St Johnstone and Hearts defender who signed in January after being released by St Mirren.

"He will probably wait and see what his agent identifies as options to play at a higher level.

"If he gets an offer, he could play at a higher level and I am sure that we couldn't match the money anyway."

Husband has spent two years with the Pars but was not offered a new deal because Jefferies believes he has enough midfielders on his books and needed to concentrate his resources on improving the striking department.

Veteran striker Craig Dargo will not be given a playing contract next season but will remain with Dunfermline as a coach.