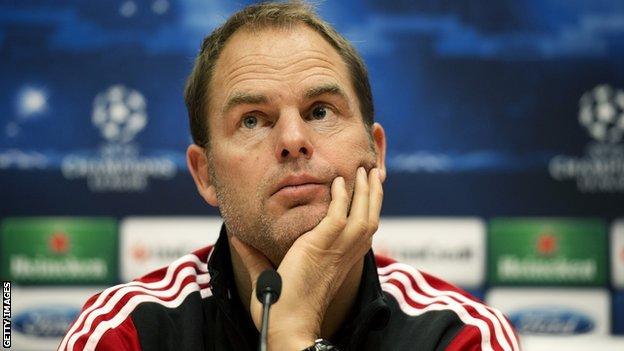 Ajax boss Frank de Boer says Tottenham have not contacted him about their vacant managerial position.

However, de Boer, 44, says nobody from Tottenham has either spoken to him personally or contacted his club in the last few weeks.

When asked if he expected them to, De Boer told BBC Sport: "I don't know. And I am happy with Ajax."

Tottenham have been searching for a new manager since they sacked Tim Sherwood on 13 May, with de Boer and Southampton boss Mauricio Pochettino heavily linked with the position.

Former Netherlands international de Boer, who has won the Dutch title in each of his four years as Ajax manager, said that he will listen to approaches from other clubs despite being under contract at the Amsterdam ArenA until 2017.

"If a club comes to speak to me I will listen to them, but I am going on holiday now and that is the most important thing for me."