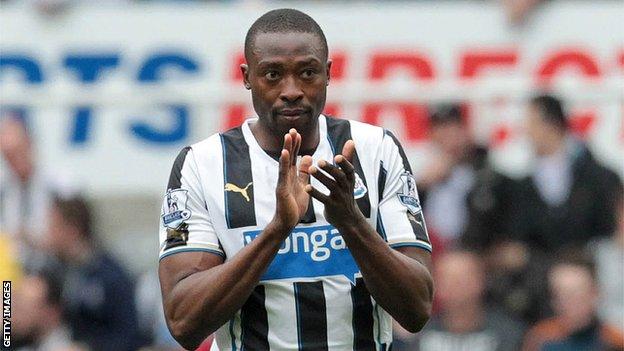 Shola Ameobi has been released by Newcastle after 14 years at the club.

The 32-year-old made 397 appearances for Newcastle, scoring 79 goals, and has been included in Nigeria's provisional World Cup squad.

Ameobi is one of nine players to be released by the club after their contracts expired.

He is a leader of men, a great role model for our younger players

Newcastle United manager Alan Pardew said: "I have to make a special mention of Shola Ameobi, who has been an incredible servant to Newcastle United. Such loyalty and commitment in the modern game is rare and Shola was not just a great player on the pitch but a key figure off it too.

"He is a leader of men, a great role model for our younger players and I wish him well for the remainder of his career."

Ameobi came through the ranks on Tyneside before making his debut in September 2000. He played in the Champions League and scored against Barcelona at the Nou Camp in December 2002.

He said: "I've enjoyed every moment and have always worn the famous shirt with pride. I am now looking forward to starting a new chapter in my career.

"I hope to come back to Newcastle United one day in some capacity to help repay some of the faith and loyalty that everybody has shown me during my time here."

Midfielders Dan Gosling and Conor Newton were not offered new contracts and have since agreed to join Bournemouth and Rotherham United respectively.