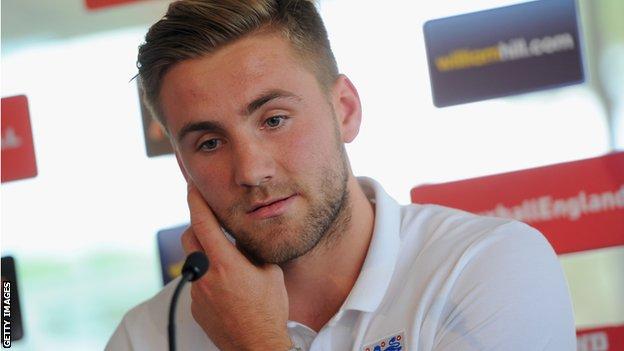 He is yet to learn to drive, has never lived on his own and his first World Cup memory was only in 2010, but Luke Shaw is about to play a part in the world's biggest football tournament.

The 18-year-old Southampton defender has only played 45 minutes for England at senior level but was selected for the World Cup in Brazil by boss Roy Hodgson in place of experienced left-back Ashley Cole.

Shaw admits it is "unbelievable" how far he has come, having only made his first-team debut at club level in 2012, and describes the call-up as "the best feeling in the world."

In a World Cup training camp in Portugal, Shaw also talks about being released by his boyhood club Chelsea, replacing his idol Ashley Cole and his future.

For the past three years, Shaw has been living in "digs" with his former Southampton youth team-mates. Unable to drive, he has been relying on lifts to take him to and from training.

Shaw's rise to the big time

As he prepares for his biggest moment in football, Shaw reveals he will return home later in the summer with two of life's toughest tests ahead of him - learning to drive and living on his own for the first time.

"I don't drive but one of the young lads [Tom Leggett] drives to training," Shaw said. "After the World Cup I am going to do that intensive course to learn to drive in one week.

"I recently moved out of digs and am going to get my own flat but my first England call-up came when I was still in digs.

"I had been in that digs for three or four years and they were like a second family to me. I loved it."

Shaw's tender age means he has few memories of World Cups. He was not even alive for Paul Gascoigne's tears in 1990 or England's failure to qualify for USA 1994.

His first - and only - memory came four years ago in South Africa when England were knocked out in the last-16 by Germany.

"Frank Lampard took that shot and it went over the line and it didn't count," he recalls. "That was the only one I can remember."

England manager Roy Hodgson described leaving Ashley Cole out of his squad in favour of Shaw as "one of the hardest decisions of my career".

Cole, 33, won 107 caps and played at three World Cups and announced his international retirement after being told he has not been selected.

Shaw only made his first senior appearance for Southampton in January 2012.

"I was a Chelsea fan when I was younger. I used to go to the games with my mates and he [Cole] was someone I idolised, the way he played his game and I looked up to him massively," said Shaw. "It is a really weird feeling to replace someone I have idolised. A few years ago I was sat watching him on TV.

"When I look back it is unbelievable how far I have come. I have had two years playing in the Premier League, now I am going to represent my country at the World Cup."

'Too small' for Chelsea

Shaw's future is likely to be one of the biggest talking points this summer, with Manchester United having already reportedly offered £27m for him.

He became the youngest Southampton player to win an England cap after coming on at half-time against Denmark in March and is the third-youngest England squad member in World Cup history after Theo Walcott (17) in 2006 (did not play) and Michael Owen (18) in 1998.

Several other leading outfits have been linked with a move for Shaw this summer, including Chelsea - the club who released him for being too small 10 years ago.

"I can't remember much of being released. But I remember the first day of my trial at Southampton - I got a phone call straight away to say they wanted to take me on."

Southampton and the future

For the moment though, Shaw's future is going to have to wait as preparations step up for the World Cup.

Hodgson's team take on Peru in a friendly at Wembley on 30 May and go to Miami for matches against Ecuador and Honduras before their opening World Cup game in Manaus against Italy on 14 June.

Of the speculation on his future, Shaw said: "That doesn't bother me one bit, I am here to play for England and that is all I am focusing on."

Shaw, who is expected to act as a cover for Everton's Leighton Baines, is joined by Saints team-mates Adam Lallana and Rickie Lambert in Roy Hodgson's squad of 23.

Southampton have also produced England's Alex Oxlade-Chamberlain and Theo Walcott, now at Arsenal, in the past.

"The way we get brought up is a very good way," said Shaw. "We are all meant to be grounded and not big time.

"Maybe at other clubs there might be other players who receive a professional contract and think they have made it already. But at Southampton we are told not to think like that, we just want to train our best and play our best.

"I am sure if someone goes over the limit and starts acting big time they will be brought down a peg."

'A credit to Southampton'

While Shaw burst on to the international scene in his teens, Lambert waited until the age of 31 for his England bow in August 2013.

"Luke must think it is this easy for everyone," Lambert said. "But it shows just well he has done and he deserves everything he is getting. To be where he is in such short time is unbelievable.

"He has everything. Not many people get past him, the best wingers in the Premier League won't get the better of him. I can't remember one.

"For such a young lad it is frightening really. I think it is full credit to Southampton that the mental strength of them coming into the first team and taking it in their stride, I have never seen anything like it."