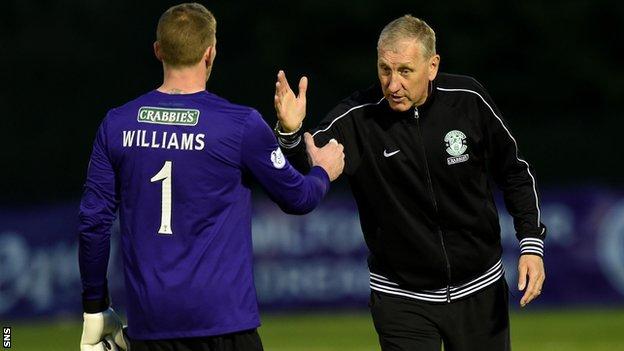 Hibernian manager Terry Butcher insists no plans for next season will be made until after the second leg of the Premiership play-off final second leg.

Butcher's side hold a 2-0 advantage ahead of Sunday's visit of Hamilton Academical.

And the manager is expected to sit down with out-of-contract players on Monday to discuss whether they are staying or going.

"I'm not looking at that," said Butcher when asked about next term's plans.

"We have a slight advantage. Both teams have to go for it, both teams want to finish the season on a high."

The Hibs boss has been impressed with his players' attitude since their fate in the play-offs was sealed by a 1-0 defeat by Kilmarnock on the final day of the Premiership league campaign.

They want to see the job through and finish it off on Sunday. They're going about it the right way and so far, so good

Championship runners-up Accies appeared to have the momentum ahead of Wednesday's first leg, having finished their league strongly and negotiated a play-off semi-final win over Falkirk.

However, two Jason Cummings goals put Hibs in control of the tie.

"The players were excellent when we got back in the changing room," said Butcher.

"There was no euphoria, there were no high fives. They said, 'it's not over yet, it's only half-time'. Straight away, they turned their attention onto the match on Sunday. That's a brilliant attitude from them, but they've been like that ever since the Kilmarnock game.

"They want to see the job through and finish it off on Sunday. They're going about it the right way and so far, so good.

"Hamilton are a good side. They've got good players and they certainly played very well on Wednesday night.

"But, for once this season, since I've been at the club, we were very ruthless."

With players out of contract in the summer and others likely to be released, striker Paul Heffernan confirmed no discussions had yet taken place between the manager and players.

"I don't think the manager's spoken to anybody about their futures just yet," said the former Kilmarnock forward.

"We just want to concentrate on getting over the Hamilton game and then I'm sure the manager will sit down and speak to people then."