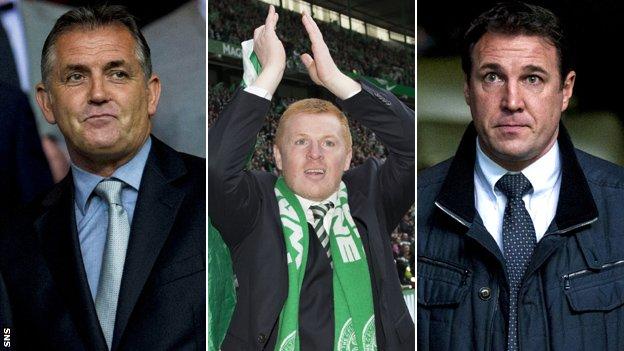 Celtic will find it difficult to prise a manager away from English football, according to former Bhoys midfielder Murdo MacLeod.

Neil Lennon will help the club find his successor after announcing his departure on Thursday.

Many names have been linked with the post, but MacLeod says even out-of-work bosses will hold out for English jobs.

"There's so much money down south, the managers are quite happy staying there," he told BBC Radio Scotland.

"When you look at the ones that have been mentioned - David Moyes will be looking for another big job in England and I don't know whether he would come back up to Scotland and manage Celtic. I think he would stay down south," added MacLeod.

"I don't know if Celtic will go down the line of someone just a wee bit different from the normal type of ex-Celtic players. I think they'll be in line first."

MacLeod expects former Celtic defender Malky Mackay, who left Cardiff City in December, and former Bolton and Wigan boss Owen Coyle to be in the frame to replace Lennon.

And the BBC Sportsound pundit admitted his surprise at the Northern Irishman's departure.

"To walk away and he's not got a job in England - that's the surprise for me," said the former Scotland player.

"Neil's said over the last few months that he wants to go down to English football and we all felt he's going to go at some point and walk into a job in England.

"In a short time, to win three titles and the European campaign two years ago was one of the best campaigns Celtic have had in years so he'll be well remembered."

Johan Mjallby announced last month that he was leaving his post as Lennon's assistant.

And MacLeod believes the duo could be reunited at a new club.

"It'll be interesting because Johan left for his own reasons, maybe to start on his own somewhere else, but they could team up again," added MacLeod.

"They were a very good partnership at Celtic Park. They were both novices going in at the beginning and over the years they got stronger and stronger.

"You just look at the side now; the way they play, the amount of goals they score and going through the season losing just one league match was an achievement."