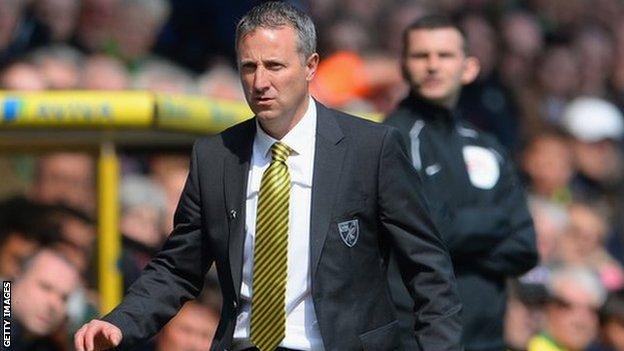 Norwich caretaker boss Neil Adams has been handed the job on a full-time basis, signing a three-year-deal.

Adams, 48, took charge of the Canaries for the last five games of the season, following the sacking of Chris Hughton, but could not prevent their relegation.

"He is a very talented coach who is hungry to succeed, playing the kind of football we want to see," said chief executive David McNally.

Adams added: "It is a huge honour and I am immensely proud."

McNally continued: "Neil impressed us when he stepped up to the plate for the last five games of the season in the most trying of circumstances and he's continued to impress us during a very rigorous round of talks about the full-time managerial position.

"We have the nucleus of an excellent squad and Neil will be given funds to refresh and strengthen the squad where required.

"It's now time for everyone connected with the club to give their full support to Neil as we focus on the future of this great club and prepare for the vital weeks and months ahead."

Adams was a surprise appointment when he replaced Hughton in April, and he failed to turn around results, overseeing four defeats and one goalless draw, against Chelsea at Stamford Bridge.

Adams joined Norwich City from Oldham Athletic in February 1994 and went on to make 206 appearances for the Canaries, scoring 30 goals. He rejoined Oldham before returning to Carrow Road initially as coach of the Canaries' Academy Under-14s side.

He later became the Under-18 Academy coach and led the Canaries to FA Youth Cup victory in 2013, beating Chelsea in both home and away legs of the final.

"Work starts straight away on putting into place the necessary requirements for next season," added Adams.

"The priority is to ensure that attacking, attractive and winning football is once again the norm for supporters of this club.

"I can assure everyone that we will all be working as hard as possible to achieve our objective of returning this club back to where it belongs."