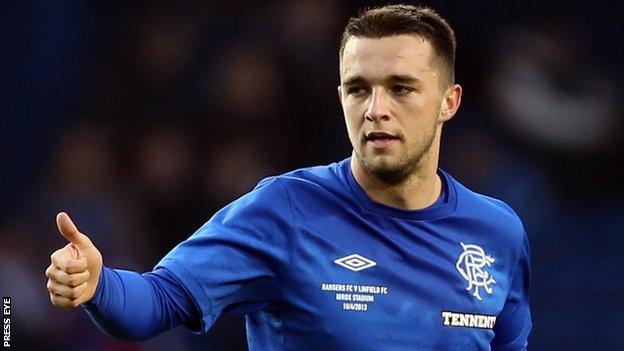 Hegarty, 21, can play at right-back or centre-back, and has represented Northern Ireland at underage level, including the Under-21s.

His campaign was blighted by injury and he recently stated his intention to move on in a bid to secure regular first-team football.

He joined Rangers from Millwall in 2010, before making his senior debut two years later.

Hegarty won a Third Division championship medal following the Ibrox club's liquidation but has struggled to find fitness and form this term.

"I fulfilled an ambition by playing for a team I grew up supporting and I'll always be grateful for the opportunity," said Hegarty.

"I had a bad time with injury last season and at this important stage of my career I need to play first-team football week in week out and the Rangers manager (Ally McCoist) was good enough to let me go and pursue that.

"Warren has painted me a picture of what he wants to do with Linfield and I'm looking forward to the season ahead.

"My best position is centre-back, that's where I'm most confident and dominant."

Feeney lauded his new signing for his "experience of full-time football and his desire to win".

"Chris is a quality player. He had a year left of his contract at Rangers but when I spoke to him he was excited at the prospect of coming to this club," said the Blues boss.

Mallards manager Whitey Anderson has reportedly beaten off competition from Coleraine and Glenavon to sign the striker who scored the winner for Sligo Rovers in the FAI Cup final over Drogheda in 2013.