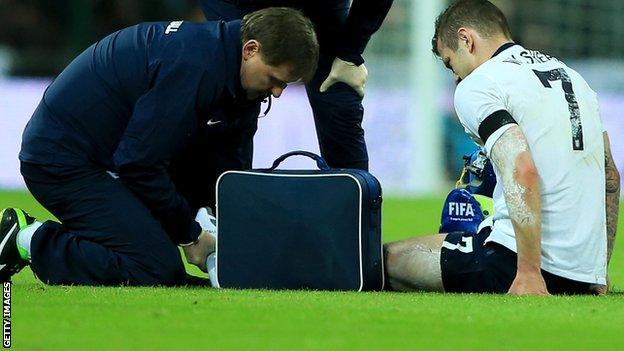 England midfielder Jack Wilshere could be set for a key role at the World Cup, despite an injury-hit season, after being handed the number seven shirt.

The Football Association announced England's squad numbers for the finals in Brazil on Thursday.

Wilshere, 22, has only played twice for Arsenal since March, but could be in line to start England's World Cup opener against Italy on 14 June.

There were few other surprises, with Daniel Sturridge taking number nine.

The 24-year-old striker has been rewarded for his fine season with Liverpool and could start along with Manchester United striker Wayne Rooney, who has been handed the number 10 shirt as expected.

Wilshere, who is coming back to fitness after suffering a hairline fracture in his foot playing for England on 5 March, could make up a three-man central midfield, according to the squad numbers.

Hodgson's team take on Peru in a friendly at Wembley on 30 May and go to Miami for matches against Ecuador and Honduras before their opening World Cup game in Manaus.