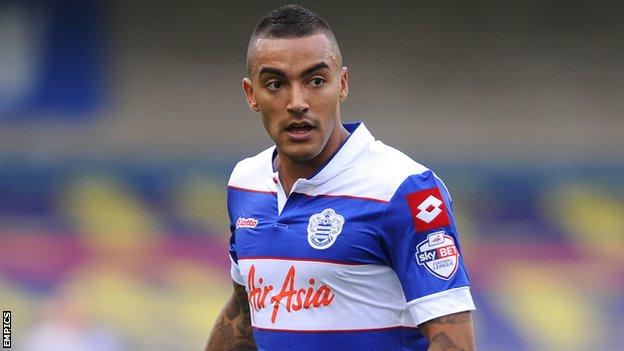 The R's face Derby County at Wembley Stadium on Saturday.

Simpson, 27, told BBC Radio 5 live: "Harry is probably one of the most experienced managers the country has got. He is relaxed and I think that's good as he passes that onto us.

"He is focused and determined and that is what we want as players."

Simpson continued: "He has been top class this week and I'm sure he will be the same on the day."

Former Manchester United and Newcastle man Simpson joined QPR on a free transfer last summer and the right-back has made 38 appearances for the west London side this season.

I don't think anything about myself. It's about the club really. The club is here forever and I'm only just passing through. It's for the fans, the owners and the players

Simpson says the play-off final will be the biggest one-off match he has played in during his career.

"I've played Champions League games with Manchester United, the quarter-finals of the Europa League with Newcastle, as well as Newcastle-Sunderland in the league," he said.

"What you get for getting through is massive; not just for me and the players but for the fans, for next season, for the manager and the staff and everyone involved with QPR.

"At the end of the day we all want to play in the Premier League."

However, after 15 years of Premier League managerial experience, an FA Cup winners medal and a Champions League quarter-final with Tottenham, he is solely focusing on securing an immediate return to the top flight for QPR.

"This is a great day to look forward to," the 67-year-old said

"I don't think anything about myself with this, honestly. It's about the club really.

"The club is here forever and I'm only just passing through, like any manager.

"It's for the fans, the owners and the players. To see the joy you can bring to the fans is what it is all about."

Much has been made of the financial implications should QPR remain in the Championship; with a loss of £65m announced in their financial accounts for the year to May 2013, a high wage bill and promotion worth up to £120m for the victorious club.

But Redknapp is adamant he is concentrating on matters on the pitch.

"I don't know what the financial situation is and I don't even know the wages of any of the players at this club to be truthful," he told BBC London 94.9.

"I don't get involved in that side of it.

"When players do contracts they don't do contracts with me. With players we have brought in we haven't gone silly with wages.

"I think the club is being run by good people who care. I'd like to see them get back in the Premier League.

"We are together and want to do it together."