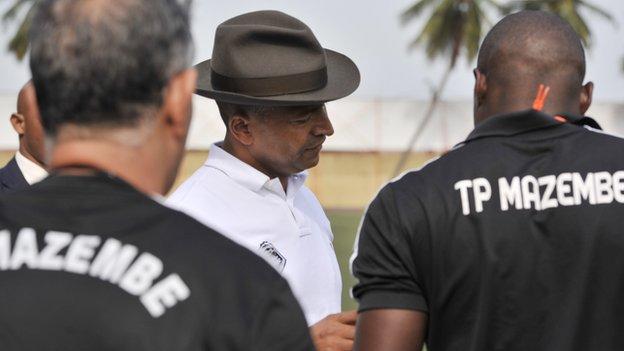 TP Mazembe were 1-0 winners over their Congolese rivals AS Vita Club in Group A of the African Champions League.

The fixture passed off peacefully following the tragic events of two weeks ago in Kinshasa when the two clubs last met.

15 people died in a stampede during their domestic league decider which Mazembe won.

Sunday's African Champions League match was played amidst a terrific atmosphere in Lubumbashi.

The focus on this fixture was intense before kick-off following the tragic events at the Tata Raphael Stadium in Kinshasa two weeks ago.

TP Mazembe were again victorious with just one goal settling the match. Aly Samata's 62nd minute strike was enough to ensure the hosts picked up the victory.

It is one win apiece for all four sides in Group A after Egyptian club Zamalek picked up three precious Champions League points with a 2-1 win over Al Hilal of Sudan in Cairo.

Ahly triumphed over Esperance despite having to forfeit home advantage because of civil unrest and play in the Tunisian coastal city of Sfax.

In the other Group A game Egyptian side Zamalek secured their first win of the campaign, with defender Mohamed Abdul-Shafy the unlikely star as they edged Sudanese club Al Hilal 2-1 in a game staged behind closed doors in Cairo for security reasons.

Zamalek coach and former Tottenham Hotspur and West Ham striker 'Mido' had outlined the importance of the match before kick-off. What he could never have imagined, though, was a defender displaying exquisite skills to earn the 'White Knights' maximum points.

Abdul-Shafy provided breathtaking edge-of-the-box ball control as he shifted the ball from one foot to the other before hammering a low shot into the net for the winner eight minutes from time.

He also created the early opening goal for Mauritania-born Dominique da Silva. Eltaib had equalised for Al-Hilal midway through the opening half.

While in Group B two-time African Champions League winners Esperance are in serious trouble as the Tunisians suffered a second successive defeat, losing 3-2 to Libyans Al Ahli Benghazi.

Defeat leaves Esperance without a single point at the bottom of Group B while Benghazi are third with three points. It also signalled the end of Ruud Krol's short reign as Esperance coach as

El Hedi Balameiri scored for the second week in a row to give Setif the lead after just 12 minutes.

The visitors drew level in added time at the end of the first half through Ali Maaloul.

The next group games are on the weekend of 6 to 8 June.