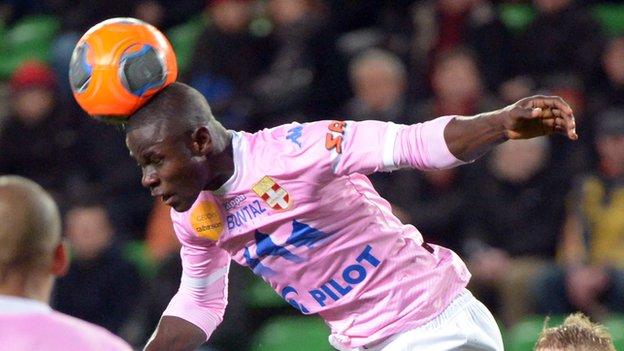 Ghana defender Jonathan Mensah believes the Black Stars can reach the last four at this summer's World Cup in Brazil.

In 2010 they narrowly failed to become Africa's first semi-finalists when they lost on penalties to Uruguay in the quarter-finals, having missed a spot-kick in the last moments of extra-time.

"I think we will do better than we did last time," Mensah told BBC Sport.

"If we can stick together and take it it game by game, I believe we can stun the world in Brazil."

Ghana have possibly the toughest draw of all the African sides at the finals, drawn in Group G with Germany, Portugal and United States.

But the 23-year-old Mensah insists the four-time African champions are well equipped to make history.

"The best mentality going into any tournament is that you can achieve bigger things. You don't go there limiting yourself because some people think it's impossible," he said.

"We still have the same experienced players with a blend of committed younger players and everyone has improved in all aspect of the game.

"The team has also improved physically, psychologically and mentally. We can only set the bar higher this time, so without sounding too arrogant or disrespectful I think we can do better than we did in South Africa."

The Black Stars will open their campaign against the USA on 16 June, then play Germany and finish their group fixtures against Portugal. A bad start would heap the pressure on Ghana and some critics have suggested they may not be up to the task.

Mensah, who played in two group stage games and in the round of 16 win against United States at the 2010 event, insists they will give their answer on the pitch.

"As a professional footballer you don't allow what people say get to you because they said similar things about Ghana in 2006 and 2010," Mensah said.

"With teamwork, our blend of youth and experience, new maturity, love and understanding, I think we can put Africa on the map in Brazil."

Mensah attributes his confidence to a strong work ethic and bond within the squad under coach Kwesi Appiah.

"The players have big respect for the manager who always wants the team to get better every day," said the Evian centre-back.

"There's also that bond within the squad. The senior players welcome young players like their own blood brothers.

"It doesn't matter where you play or who you are and what you've achieved in football, everyone is just fighting for one cause, for the country and our passionate fans."