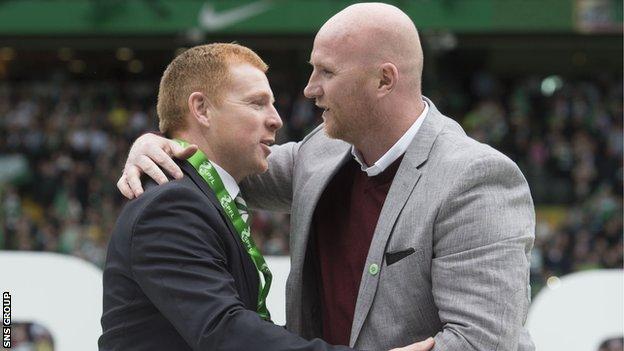 "Maybe he wanted a break from it," Hartson told BBC 5 live on hearing of Lennon's decision to stand down.

"It's not been a particular easy ride for him in Glasgow, he's had personal issues and abuse and threats."

But another of Lennon's former team-mates, Alan Stubbs, said: "I'd be surprised if he left Celtic without having something lined up."

Lennon, 42, is leaving Celtic after four years at the helm, during which he delivered three league titles and two Scottish Cups.

And Hartson, who played alongside the former Celtic skipper for five years, said: "I'm surprised it has been so sudden. There was no warning really other than links with other clubs.

"On the other hand, Neil has given Celtic 12 fantastic years of great service, seven as a player and latterly as a coach and manager, so maybe he just fancies a new challenge.

"There are several jobs out there, the likes of West Brom, but whether or not Neil will go straight in, I don't know."

He was difficult at times to get on with as a player, but as a manager, I can't speak highly enough of him

Stubbs also played with Lennon during his time at Celtic and thinks his old team-mate can be proud of his managerial achievements.

"Neil's done really well since coming into the job and done everything asked of him," Stubbs told BBC Radio Scotland.

"To win the titles and getting to the knockout stage of the Champions League would've been on his job spec and he's passed with flying colours."

Republic of Ireland winger Aiden McGeady was also full of praise for his former boss.

"Ever since he took over at Celtic from when I was there, he was brilliant," said the Everton man.

"I played with him. He was difficult at times to get on with as a player. But, as a manager, I can't speak highly enough of him.

"He was fantastic when I was there and led the club to many trophies in the last four years.

"To be honest, it's not really come as a surprise because of some things I've heard from a few people, that he was a bit unsettled and had probably kind of done all he thought he could do with the club and maybe was looking for a new challenge down in England somewhere."

McGeady then warned whoever succeeds Lennon at Celtic Park that they will have to win two trophies a year to be considered a success.

Former star striker Henrik Larsson, currently with Falkenberg in his native Sweden, has been installed as the bookmakers' favourite.

"It will be a difficult job because Celtic is a massive club and success is a way of life.

"If you are not winning two trophies a year, you are seen as a failure."

Stubbs, on the coaching staff at Everton, said: "The one thing you will say is that there won't be a shortage of high-calibre applications for the job; it's a fantastic job and a great opportunity for someone."

Hartson is also predicting plenty of interest in the new vacancy in the east end of Glasgow.

"There's lots of people linked already," said the Welshman. "You've got people like (Aston Villa boss) Paul Lambert, Jackie McNamara, who has done very well at Dundee United, and the favourite is Henrik Larsson, a cult figure among the fans.

"Also Malky Mackay is out of a role. The fans take to the managers in Glasgow and it will create lots of interest because it's a fantastic job."