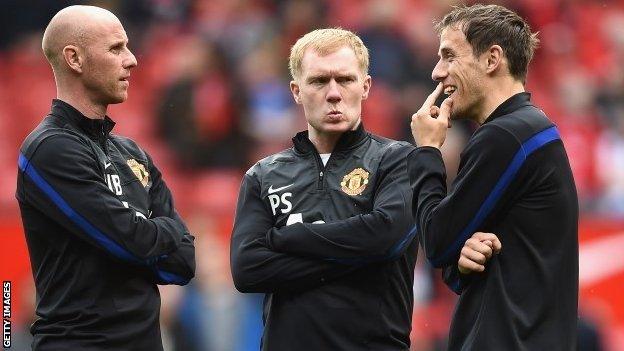 "I'd bring in [Bayern Munich's] Toni Kroos, but United need five or six to get near the top," Scholes said in a blog for bookmaker Paddy Power.

The 39-year-old, who assisted interim boss Ryan Giggs for United's last four games, added he "did not expect" to be involved with the club next season.

Scholes believes that Germany international Kroos should be his first target, describing him as "a top-class central midfielder".

Kroos, whose contract expires with the Bundesliga champions at the end of next season, is rumoured to have already agreed a £20m switch to Manchester United.

Securing the 24-year-old would represent an early start to United's summer's transfer business, in contrast to last year when the club failed to follow up interest in Cesc Fabregas and Thiago Alcantara, both at Barcelona at the time, with successful bids.

Everton and Belgium midfielder Marouane Fellaini was the only major summer signing, arriving for £27.5m.

But United could have got him for £4m less had they acted sooner, before a release clause expired.

"Edward Woodward has an awful lot to prove this time that he's good enough at his job," said Scholes.

"He has to bring the players in that the new manager wants. It's obvious that last year he didn't manage to do that. If he doesn't, we are not going to get anywhere near the top."

Scholes, who scored 155 goals in 718 appearances for United before retiring in May 2013, also believes that Rooney may have already peaked after making his Premier League breakthrough as a 16-year-old.

"Wayne's peak may have been a lot younger than what we'd expect of footballers traditionally. With Wayne, it could have been when he scored 27 league goals in 2011-12 when he was 26.

"I'm not saying Wayne needs to be dropped, but if his form doesn't get up to scratch in the warm-ups, or in the first game of the World Cup, it'll be interesting to see if the England management team has the balls to make that decision."