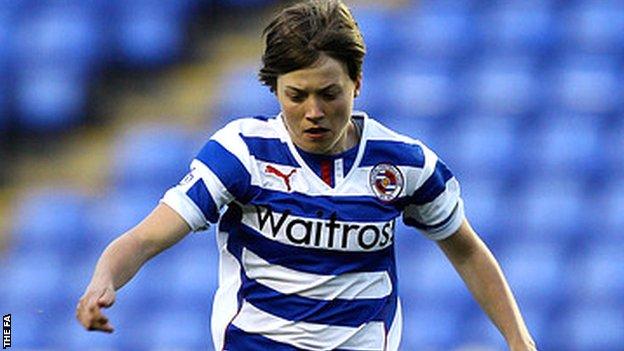 Reading striker Fran Kirby has made the cut after the England Women's provisional squad was trimmed to 23 for two World Cup qualifiers this month.

Kirby is the first player from the second tier called into the senior set-up since FA WSL 2 started this April.

"I was quite surprised to be included in the long squad and even more so now," said Kirby.

England, who play in Belarus on 14 June and Ukraine five days later, have a 100% record from six Group Six games.

"It's great that manager Mark Sampson and his team are looking at Women's Super League 2 and coming to watch games," added Kirby.

"The league is of a high standard and we've been pushing Super League 1 teams when we've been playing them in the Continental Cup."

"I am really excited with this group. There is a real sense of positivity which, going into two difficult away matches, will be very important to help us perform to our maximum," said England coach Mark Sampson.

"We have a number of players really at the top of their game including Fran Kirby. She is a player with great potential who is really enjoying her football at the moment and playing very well."