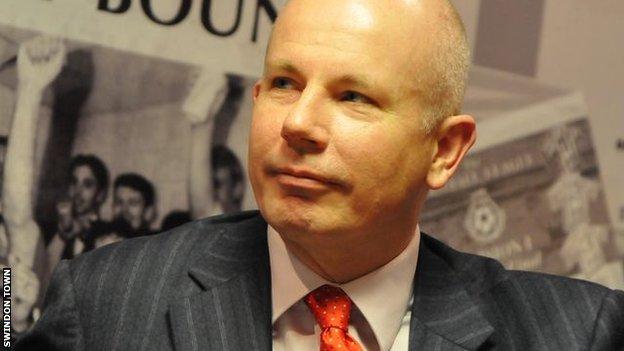 Former Swindon Town chairman Jeremy Wray has confirmed to the BBC he is part of a British consortium trying to buy a stake in Birmingham City.

Wray and his associates are in advanced talks over buying into the Championship club, who are offering up a minority 24% share.

After four years on the board and 18 months as chairman at Swindon, Wray left the County Ground in October 2012.

His group is now carrying out due diligence ahead of any investment.

Wray was part of a consortium that took control at Swindon in 2008 and played a bit part in the club's revival.

He appointed manager Paolo Di Canio, who took the club to the League Two title in 2011-12.

Despite his Soccer Management Worldwide Ltd group emerging as the preferred bidder for Blues, Wray has warned there are "no guarantees" that their bid will be successful.

The latest confirmation comes after the club's holding company - Birmingham International Holdings Limited (BIHL) - made an announcement to the Hong Kong Stock Exchange (HKSE) over the weekend that they were in "advanced discussions" with a British consortium, backed by a North American investment fund.

Blues acting chairman Peter Pannu stated there had been an indicative, non-binding offer from a third party in relation to a possible acquisition of a minority interest in Birmingham City PLC.

"I can confirm that BIHL remains in advanced talks with a British consortium with a very strong North American investment fund," said Pannu.

"However, specific details cannot be disclosed at this moment in time due to non-disclosure agreements and HKSE regulations.

"There are many technical issues still to be resolved and legal representatives from both parties remain in advanced discussions to pave the way forward."

A month ago, prior to Blues sealing their survival in the Championship on a dramatic final day of the season, it emerged that Birmingham officials were considering up to four offers to buy the club.

The British-based consortium was willing to pay in the region of £32m for Birmingham, who have been up for sale now for over two years, but there was also interest from China, Australia and the Middle East.

The club's future has effectively been on hold since owner Carson Yeung first appeared in court in June 2011, just a month after relegation from the Premier League was confirmed.

Yeung, 54, was jailed for six years in March after being found guilty of money-laundering in Hong Kong.

He remains Birmingham's largest shareholder but has resigned from all positions related to the club.

Birmingham reached the Championship play-offs under Chris Hughton in 2012, before finishing safely in mid-table under Lee Clark, prior to this season's frantic relegation scramble.