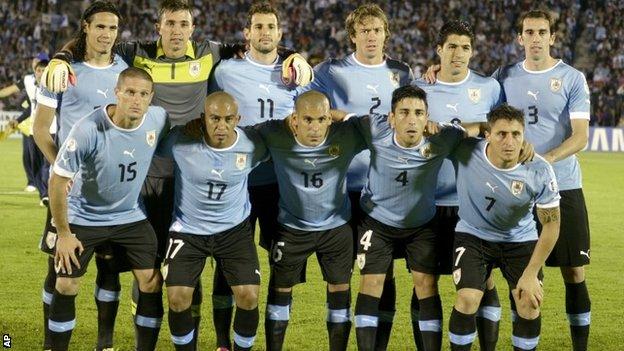 Northern Ireland's friendly against Uruguay is to be shown live on the BBC.

The match, in Montevideo on Friday, 30 May, will be broadcast on the Red Button and also be streamed on the BBC Sport website. You can press the Red Button on either BBC One NI or BBC Two NI to watch the match.

Kick-off for the match at the Estadio Centenario is 00:30 BST and the commentator will be Michael McNamee.

On Freeview and BT Vision, the Red Button feed can be found on Channel 301, on Freesat Channel 981 and Virgin Media Channel 991.

For those watching with Sky, coverage will be available only by pressing the Red Button.

Alternatively fans can also watch the game live by logging on to bbc.co.uk/sportni.

"They will be one of the sides who fancy their chances of winning the World Cup - and with players of the calibre of Luis Suarez and Edinson Cavani, why not?

"I'm delighted BBC Northern Ireland has secured the rights to show the Uruguay game live on the Red Button and via our BBC Sport NI website.

"We will also broadcast on the website an extended highlights package of the friendly match against Chile the following week."

Patrick Nelson, chief executive of the Irish Football Association, said: "We are delighted that BBC Northern Ireland have obtained the rights to show this game live on their Red Button and internet services. Northern Ireland fans all over the UK will be able to see live how well our team does against one of the World Cup favourites."