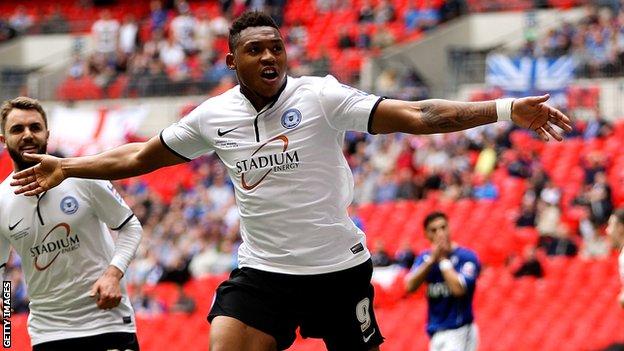 The 21-year-old forward scored 33 times in 58 appearances this season for the League One side.

"Hopefully that 33 goals will end up as 40 next year. Even if we get offered £5m for him we're not interested," Fry told BBC Radio Cambridgeshire.

"There are three Premier League clubs that have enquired about him."

Assombalonga began his career at Watford, becoming their 50th academy product to take the step up to the first team, and scored 15 times while on loan at Southend last season.

Posh paid a club record fee to bring him to London Road and he finished as League One's joint-top scorer.

"It would be very difficult to sell Britt and replace him with someone who can get that number of goals," Fry added.

"He's young, he's got a lovely attitude and he played 58 games for us last year which is absolutely unbelievable.

"We've spoken to Britt and his agent, who's Gareth Bale's agent, and we've said he's far better to develop here.

"We're more concerned with getting players in so they can give him more service and get even more goals."

Goalkeeper Robert Olejnik, who was named the fans' player of the year this season, was transfer-listed last week, in line with Peterborough's policy for players in the final year of their contract.

"I spoke to his agent, he wanted more money and there's no way we're in a position to give him more money," said Fry.

"There isn't a contract on the table for Bobby. They understand the situation and he's on the list. I've had no enquires about him yet but it's early days."