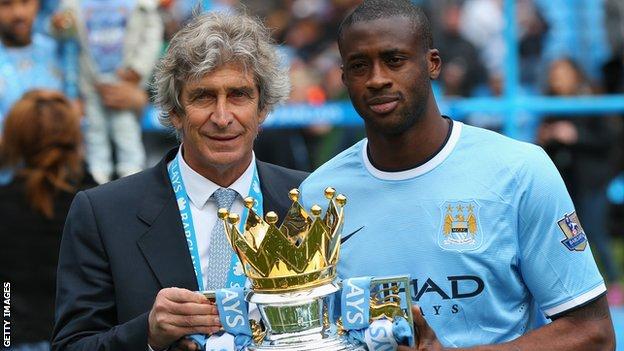 Yaya Toure has thrown his Manchester City future into doubt by backing up his agent's claims that the club's wealthy owners showed him a lack of respect on his 31st birthday.

Dimitri Seluk told BBC Sport that Toure was "very upset" and could leave.

Toure initially played down the row on Twitter, saying: "Don't take words that do not come from my mouth seriously."

If they don't respect him then, easy, Yaya will leave

But he then wrote: "Everything Dimitri said is true. He speaks for me. I will explain after the World Cup."

City gave Toure a birthday cake as they flew to Abu Dhabi and tweeted their congratulations after he turned 31 on 13 May, but Seluk says he was ignored by the club's owners when the squad arrived in the United Arab Emirates last week to celebrate their Premier League title triumph.

"None of them shook his hand on his birthday. It's really sick," Seluk said.

City declined to comment officially on Seluk's initial claims and are yet to respond to BBC Sport over Toure's subsequent comments.

The agent also claimed Toure was unhappy in March 2013, shortly before he signed a new four-year contract, but insisted this latest row is about "respect", not money.

"He got a cake but when it was Roberto Carlos's birthday, the president of Anzhi gave him a Bugatti," Seluk added.

"I don't expect City to present Yaya with a Bugatti, we only asked that they shook his hand and said 'we congratulate you'. It is the minimum they must do when it is his birthday and the squad is all together.

When Roberto Carlos was given an £800,000 car for his birthday

Roberto Carlos's agent Paulo Teixeira: "This particular situation was due to the fact Anzhi Makhachkala president Suleyman Kerimov likes Roberto Carlos very much and decided to give him a car.

"It was extraordinary situation and not common practice in football. Roberto Carlos, before the Bugatti, had seven cars. He didn't need a car but he accepted the gift."

"I hear one newspaper has written that City congratulated him from Twitter but this is a joke. It is better they don't put anything on Twitter if they are not saying anything to him.

"The club's owners ate a 100kg cake after winning the Premier League this season but when they and the players were all together, none of them shook his hand on his birthday. It shows they don't care about him.

"Of course Yaya is upset about this. If this happened to you as a journalist in the BBC and nobody shakes your hand, you will say bye-bye and go to work for somebody else. It is normal."

The agent of Carlos, Paulo Teixeira, told BBC World Service he did not know why Seluk had chosen to refer to the £800,000 Bugatti Veyron that the former Brazil defender received as a gift for his 38th birthday in 2011.

"I don't see why this is coming out," Teixeira said. "It's nothing to do with the contract of the player. Toure has got enough money to buy 10 or 20 Bugattis. This is about egos.

"If Yaya's agent comes out with this, it's because he understands his player, what his player needs and maybe he's trying to make the management of the club do something for the player. But I don't know why they're picking up on this, it's almost to the limit of being ridiculous."

Seluk is adamant he is not looking to negotiate an improved contract for Toure, saying: "No. Money is not important. He has enough money.

"The most important thing is a human relationship and maybe this is his opportunity for Yaya to find that. If City don't respect him, then, easy, Yaya will leave. No problem.

"It is more important he plays for a club that respects him more than having a few thousand pounds added to his salary."

"I have spoken to him about leaving and we will see what happens, but, at the moment, Yaya is really upset."

It is not the first time either Toure - who named his second child after Seluk - or the agent have claimed the player does not get the respect he deserves.

In a recent interview for the BBC, Toure said he felt he was not regarded as one of the best players in the world because he is from Africa.