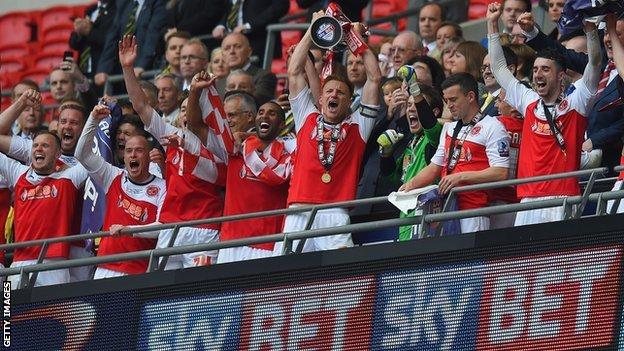 Antoni Sarcevic's second-half goal earned Fleetwood promotion to the third tier of English football for the first time in their history at the expense of Burton Albion.

Billy Kee had gone close to giving Burton the lead earlier in the second half of the League Two play-off final at Wembley, but he fired over when through on goal.

It means Fleetwood have now won promotion in six of the last 10 seasons.

Pond's involvement in the only goal of the game highlighted the dramatic rise of a club who were playing in the North West Counties League just nine years ago, and had last appeared at Wembley as FA Vase finalists in 1985.

The 29-year-old defender has ended his testimonial year with his own personal double hat-trick of promotions, having made his debut for the Lancashire club in front of just 81 fans more than a decade ago.

But it was a second year of heartbreak for Burton fans, who saw their side fall at the semi-final stage against Bradford last season.

Fleetwood, who had finished fourth in only their second season in League Two, had looked the most likely to score early on, with Lyness twice denying David Ball before Pond headed wide from one of the Cod Army's many corners.

Lee Bell went close with a 30-yard strike at the other end and, with Burton beginning to create chances, Adam McGurk fired over with an ambitious attempt before Kee saw a diving header fly just wide of Chris Maxwell's goal.

Maxwell then did well to block another powerful shot from Bell before Burton again found themselves in danger at the other end, with Ball shooting off-target following good work from Conor McLaughlin.

The road to the final

After a stale opening to the second half, Burton began to press more and, after long-range attempts from Bell and Chris Hussey, Kee should have done better when he fired over with just the keeper to beat.

Sarcevic then fired wide at the other end before the Brewers came forward again, this time Robbie Weir shooting over from distance.

As Gary Rowett's side continued to push, Alex MacDonald's shot deflected onto the top of the net and Shane Cansdell-Sherriff headed off target from the resulting corner.

Although Burton controlled much of the second half, it was Sarcevic who broke the deadlock when a distracted Lyness raced off his line and was unable to reach the former Manchester City youngster's long-range free-kick.

Despite even more pressure from the Brewers late on, Graham Alexander's Fleetwood held on to celebrate another significant milestone in their rise from step five of the non-league pyramid to within only two divisions of English football's top flight.

"I'm just pleased for my players. They have worked so hard. I'm chuffed to bits. The whole club deserves this."

"I can't believe it, from the North West Counties League to Wembley, I'm still pinching myself. I did not think any of this would happened when I joined in 2003. Conference maybe but not League One."

"I wanted the players to watch Fleetwood pick up the trophy so they felt the hurt. We now have two choices: sit and sulk or use it positively.

"Wembley is a cruel place to lose but I'd rather lose here than in the semi-finals. Goalkeeper Dean Lyness will be hurting - his handling has been terrific this season. We knew a mistake could win or lose it. One or two players just felt the occasion too much."