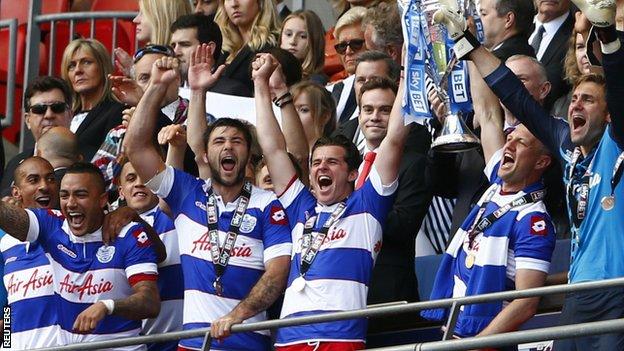 QPR substitute Bobby Zamora struck a dramatic 90th-minute winner as 10-men Rangers made an immediate return to the Premier League by defeating Derby in an absorbing play-off final at Wembley.

The London side had been hanging on - with goalkeeper Robert Green making a series of good saves - before Zamora pounced on an error from Derby defender Richard Keogh to score just his fourth goal of the season with Rangers' only shot on target.

Harry Redknapp's side had been reduced to 10 men just before the hour when Gary O'Neil was red carded for a late challenge on Johnny Russell, who was closing down on goal.

Bobby on the spot for Rangers

Bobby Zamora's goal came with QPR's first and only shot on target in the match. The 33-year-old's last three goals for the club have arrived in the 90th minute or later

Derby were already in the ascendancy by then and looked likely to go on and win the contest after assuming a numerical advantage. But Rangers defended with courage and organisation and struck decisively through Zamora, as boss Redknapp ended his first play-off campaign with promotion.

QPR had laboured through periods of the Championship season and won just four of their previous 10 games coming into the Wembley final.

But they can now start planning for a return to the top flight, with the club set to benefit by £80m according to one estimate from Sport Business Group Deloitte.

However, it may not all be plain sailing for Rangers, who made a £65.4m loss during the 2012-13 season and could yet face a huge fine at the end of the year under the Football League's financial fair play regulations if they suffer another heavy loss for the campaign just finished.

None of this will matter to luckless Derby, who were the better side for large periods.

They have played with spirit, skill and freedom under manager Steve McClaren, who took over in September with the club 14th in the Championship table.

But the young Rams side will have to wait for at least another year if they are to return to the Premier League for the first time since their relegation in 2008.

4,264 - The total amount of appearances in the Premier League made by the 27 QPR players who have previously played in the top flight

QPR, rich in age and experience, initially looked the most accomplished but they created few clear openings - top scorer Charlie Austin shot over from distance and Joey Barton smashed a free-kick into the wall - and lost Niko Kranjcar to injury by break.

Derby lined up 4-3-3 with Will Hughes retaining his place in midfield despite the return to fitness of Craig Bryson as both teams were unchanged from their semi-final second-leg fixtures.

At first, the Rams looked like a young team suffering stage fright before slowly starting to impose themselves on the contest.

Craig Forsyth headed wide and the increasingly influential Hughes thought he had been caught inside the area by Richard Dunne after pulling off a Cruyff turn but his protests were ignored by referee Lee Mason.

The nearest the game came to a goal before the end of a poor opening half was through a Jamie Ward free-kick that everybody missed except for Hoops keeper Green, who made a good scrambling save.

Austin shot wide after the restart but, that aside, Derby were clearly on top and the odds moved further in their favour when O'Neil was dismissed for his challenge on Russell just short of the penalty area. Rangers lost possession in midfield and O'Neil unquestionably snuffed out a goalscoring opportunity.

By now the momentum was firmly in Derby's favour and Green made a trio of saves to deny substitutes Craig Bryson and Simon Dawkins as well as Chris Martin.

It was one team holding on, another punching holes in the opposition defence and looking to strike a decisive blow but, after Derby failed to clear a throw-in and the soon-to-be inconsolable Rams captain Keogh scuffed his clearance, Zamora buried his effort from 10 yards as Rangers snatched victory.

You can listen to commentary of Bobby Zamora's winner on the BBC Radio 5 live website.