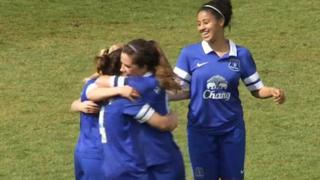 Arsenal and Everton in to FA Cup final

Watch highlights of the FA Women's Cup semi-finals, with Arsenal beating Chelsea and Everton defeating Notts County to set up a repeat of the 2010 final.

Striker Nikita Parris hit both Everton goals in their 2-1 win against Notts County, who replied through midfielder Katie Hoyle.

How do fans feel about a European Super League?

'Nothing untoward' in coded messages