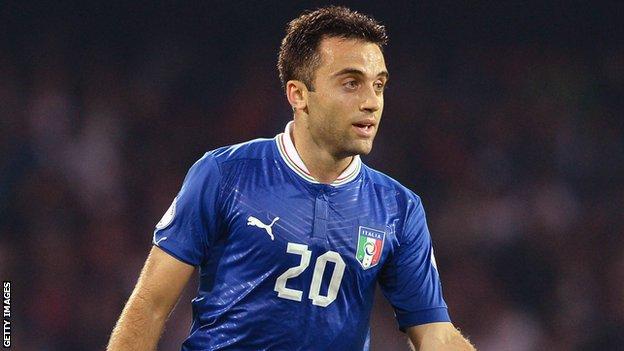 Fiorentina striker Giuseppe Rossi has been left out of Italy's 23-man World Cup squad, despite recovering from a serious knee injury.

Rossi, 27, played 71 minutes of Saturday's 0-0 draw with the Republic of Ireland, but failed to impress.

Antonio Cassano is included after scoring 12 goals for Parma this season, while AC Milan striker Mario Balotelli is also selected by Cesare Prandelli.

The 2006 winners start their campaign against England on 12 June.

They also face Costa Rica and Uruguay in Group B.

AC Milan midfielder Riccardo Montolivo is absent after breaking his left leg against the Republic of Ireland.

Centre-back Andrea Ranocchia will travel to Brazil as a possible replacement for Andrea Barzagli, who has been struggling with injury all season.

Rossi scored 14 goals in 17 Serie A matches before injuring his right knee in January, sidelining him for four months.

He made three Serie A appearances at the end of the season but has not played a full 90 minutes since returning.

Torino striker Ciro Immobile makes the squad after scoring 22 Serie A goals this season, while Cassano is included having claimed in March he lost 10kg by eating less focaccia in an attempt to secure a place in Prandelli's squad.

The Azzurri play Luxembourg in Perugia on Wednesday before flying out to Brazil a day later.