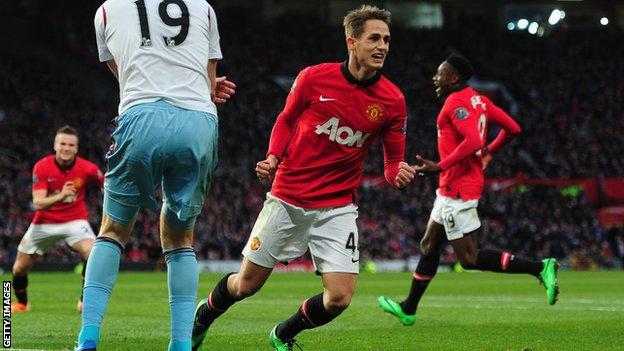 Manchester United's uncapped winger Adnan Januzaj has been named in Belgium's squad for the World Cup.

The 19-year-old, born in the Belgian capital Brussels to Kosovan-Albanian parents, could have played for Kosovo, Albania, Turkey, Serbia or, potentially in the future, England but opted for Belgium in April.

He is one of 12 Premier League players in Marc Wilmots's 23-man squad.

Belgium start their campaign against Group B opponents Algeria on 17 June.

They also face Russia on 22 June and South Korea on 26 June.

Januzaj, who arrived at Old Trafford in 2011, was on the bench for Sir Alex Ferguson's final match in charge of Manchester United - a 5-5 draw at West Brom.

After being given his debut by David Moyes, he made 27 Premier League appearances for United this season.

Chelsea provide Eden Hazard as well as Romelu Lukaku, who spent this season on loan at Everton, and Thibaut Courtois, who is still at Atletico Madrid on loan. Hazard's brother, Thorgan, who is on loan at Zulte Waragem from the Blues, was on the standby list of six players.

Zulte Waregem's Sammy Bossut, who started as fifth choice keeper, is in the squad.

Hoffenheim's Koen Casteels was a doubt with a broken bone in his leg, so he and Anderlecht's Silvio Proto were named in a 24-man squad initially.

Proto then suffered an injury himself, and Casteels was not fit enough to go to Brazil.