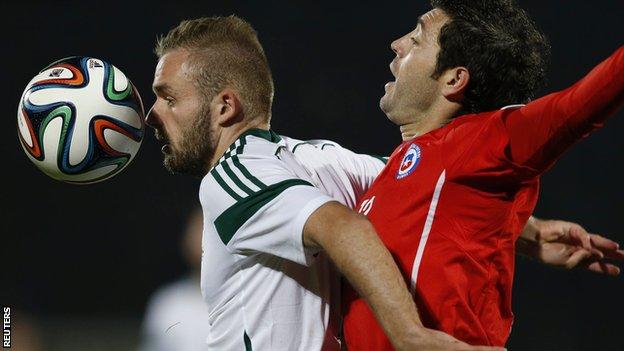 Michael O'Neill's side held their own for 79 minutes but saw their resistance broken by substitutes Eduardo Vargas and Mauricio Pinilla.

As with Northern Ireland's 1-0 defeat in Uruguay, it was a performance O'Neill could take heart from.

But it was still another loss - their sixth in eight games - and a fourth successive outing without scoring.

Goalscorers Vargas and Pinilla started on the bench, along with Barcelona star Alexis Sanchez, but Chile needed all three to ensure they completed their World Cup preparations with a victory.

The South Americans will face Australia, Netherlands and Spain in Group B in Brazil.

But they could have fallen behind in the first half against Northern Ireland, as the hard-working Ryan McLaughlin won a couple of free-kicks on the right wing.

Oliver Norwood went direct in the 38th minute, whipping a shot to the near post which Herrera scrambled to safety.

Chile dominated possession but Fabian Orellana's scuffed effort was the best they could offer.

As the hour mark approached, Jorge Valdivia saw what appeared to be a cross veer towards the top corner, but Carroll backtracked and clawed to safety.

Valdivia then headed against the post from six yards out when he should have scored after Gary Medel's flick.

Moments later, Sanchez made his belated arrival and was almost gifted a bizarre goal when Conor McLaughlin's clearance cannoned off him and needed a sprawling save from the alert Carroll.

The strength of Chile's bench eventually told, Sanchez's chipped through-ball teeing up Vargas for the headed opener 10 minutes from time.

He appeared to be marginally offside, but the result was sealed with a second when Pinilla raced into space before depositing a clinical low shot across Carroll.