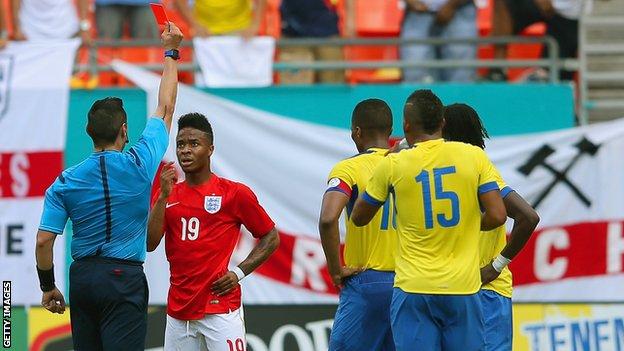 Raheem Sterling was sent off and Alex Oxlade-Chamberlain suffered a worrying knee injury as England produced a mixed display to draw with Ecuador in their World Cup warm-up game in Miami.

Liverpool youngster Sterling was dismissed 11 minutes from time for a clash with Manchester United's Antonio Valencia - who was also given a red card for reacting furiously to the challenge.

It provided a sour note for manager Roy Hodgson - as did the injury sustained by Oxlade-Chamberlain - as he saw his experimental side struggle defensively but produce some excellent work going forward, especially from Everton midfielder Ross Barkley. 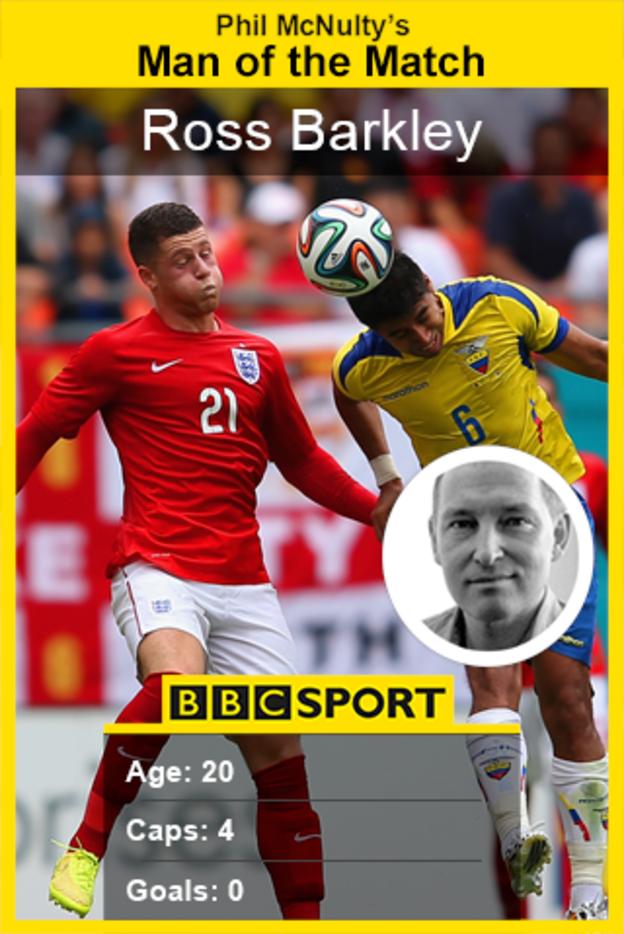 Ecuador took advantage of poor England defending as Enner Valencia headed them in front early on but Wayne Rooney bundled in his 39th goal for his country before half-time.

Rickie Lambert celebrated his dream £4m move to Liverpool by putting England ahead just after the interval following brilliant work by Barkley but the South Americans levelled through substitute Michael Arroyo's spectacular strike.

With temperatures and humidity high, it was the perfect conditioning work-out for England and there were pluses for Hodgson.

Rooney worked hard in his left-flank role and got another 63 minutes under his belt while Barkley demonstrated once again that he could become a real World Cup wildcard. Oxlade-Chamberlain also delivered some good moments before departing with an injury that his manager said afterwards was serious enough to require a scan.

None of England's revamped defence suggested they would start at the World Cup as central defensive pairing Chris Smalling and Phil Jones looked uncertain and the ploy of playing James Milner at right back was not a success.

England can now fine tune further against Honduras here on Saturday before flying to Brazil to embark on their World Cup campaign.

Hodgson's second string looked exactly that at times - and defensive frailties were exposed as Ecuador went ahead with their first attack after eight minutes.

Milner stood off Walter Ayovi and when Smalling got caught under his cross, Valencia beat Luke Shaw to the ball at the far post to head powerfully past Ben Foster.

Foster, meanwhile, had mixed success racing from his line, as England's lack of understanding left them vulnerable, but they were soon edging their way back into the game.

Captain Frank Lampard had already dragged one shot across the face of goal before forcing Ecuador keeper Maximo Banguera into action from long range.

And Hodgson's side were on level terms just before the half-hour as Rooney scrambled in from almost on the line after Lambert had flicked a shot against the post. It was not the prettiest of goals but Rooney's celebration indicated how much it meant to him.

Foster's risky dash out almost gave Valencia another chance but England escaped and almost went ahead when Shaw's fine run set up Rooney, who could not hit the target.

Barkley's powerful running had already set up Oxlade-Chamberlain and the Everton man showed his class once more as England went ahead after 51 minutes. He weaved his way through Ecuador's defence before laying the ball into the path of Lambert, who thumped in a powerful angled finish.

Ecuador were still strong, though, and causing problems for England's unconvincing rearguard.

When Oxlade-Chamberlain fell awkwardly under a challenge he was substituted in apparent discomfort, and Rooney was also taken off after 63 minutes.

The changes were the signal for a flurry of activity that ended with Ecuador equalising as substitute Arroyo marked his introduction by sending a magnificent finish high past Foster from 25 yards.

Sterling had made a promising entrance but then got involved in the skirmish that led to red cards for him and Valencia. The Liverpool forward's wild challenge infuriated Valencia, who reacted by grabbing him by the neck.

It was an unsatisfactory conclusion to a mixed bag of a performance from England.

Go to our new World Cup features and video index for our best in-depth analysis.