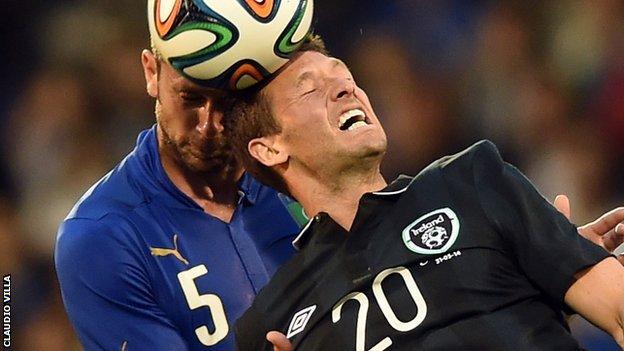 Italy were left frustrated as they were held to a goalless draw by the Republic of Ireland at Craven Cottage.

The Azzurri, England's first Group D opponents at the World Cup this summer, produced a patchy performance against a makeshift Republic side.

Martin O'Neill's men could have grabbed a late victory, but substitute Stephen Quinn smashed a shot against the bar.

And Italy will be without Riccardo Montolivo in Brazil after the AC Milan midfielder broke his leg.

The 29-year-old went down after a collision with Reading defender Alex Pearce and, after a lengthy delay, was carried off on a stretcher.

And Fiorentina forward Giuseppe Rossi may have secured his place in their final 23-man squad for Brazil by playing for 70 minutes on his return from knee trouble.

O'Neill, meanwhile, should be satisfied with his side's display, which came after two successive defeats.

But whether assistant Roy Keane is by his side again when they face Costa Rica on Friday remains to be seen, with the ex-Manchester United captain seen as a likely successor to Neil Lennon as Celtic manager.

This was Italy's penultimate match before heading to Brazil in search of a fifth World Cup triumph.

They made the brighter start, and Republic goalkeeper David Forde had to stretch to claw away Claudio Marchisio's powerful 30-yard effort.

But their momentum was stalled when Montolivo was injured, with former Liverpool midfielder Alberto Aquilani replacing him.

The Republic created their first chance in the 21st minute, with Anthony Pilkington's curled free-kick kept out by Sirigu.

Fiorentina man Aquilani, not long on the pitch, then had to be replaced himself after seeming to take a knock to the head.

As the second half wore on, the Republic sensed they might grab the victory.

And indeed they almost did as Hull player Quinn struck the bar and, from the loose ball, Aidan McGeady's follow-up effort was well saved by Sirigu.

Italy begin their World Cup campaign against England on 14 June.