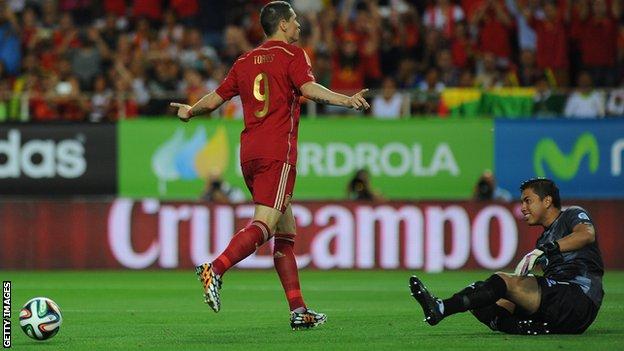 Fernando Torres and Andres Iniesta scored as holders Spain warmed up for the defence of their World Cup crown by beating Bolivia in a friendly.

Chelsea striker Torres marked his first appearance for his country in 11 months by opening the scoring with a 51st-minute penalty earned by Javi Martinez.

Iniesta doubled the lead six minutes from time with a curling shot.

Fernando Torres played for Spain at last summer's Confederations Cup, scoring four goals in a 10-0 win over Tahiti on 20 June

The team included Liverpool keeper Pepe Reina, who spent the 2013-14 season on loan at Napoli.

Gerard Deulofeu, who scored three goals in 25 Premier League appearances on loan at Everton, made his senior international debut as an 80th-minute substitute.

Spain manager Vicente del Bosque is due to announce his 23-man squad for the World Cup on Saturday.