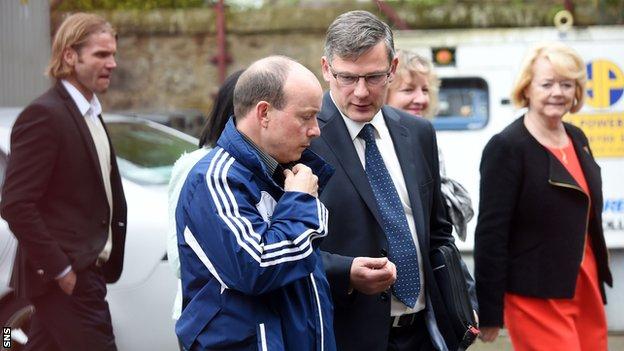 Craig Levein and Robbie Neilson are the new management team at Hearts, with Gary Locke, his backroom staff and three senior players exiting the club.

Goalkeeper Jamie MacDonald and midfielders Ryan Stevenson and Jamie Hamill have all left the club.

Hearts, who started the season with a 15-point deduction for entering administration, were relegated from the Scottish Premiership.

Levein, who played for Hearts for 14 years and managed them between 2000 and 2004, will have overall control of football matters at Tynecastle.

Neilson, who became player-coach at League One club East Fife in September but has been helping with Hearts youths, played under Levein during a 10-year stint at Tynecastle before spells with Leicester City, Brentford, Dundee United and Falkirk.

It will not become clear until Hearts hold a media conference on Tuesday which of the two men will have final responsibility for picking the team on match days.

In a statement released on the Hearts website, Budge said she knew it may be an "unpopular decision" with some fans not to offer Locke an extension to his contract, which expires this summer.

"Please believe me when I say this has been an enormously difficult decision to make," she said.

"We all know the pressures that Gary and his assistant, Billy Brown, have worked under over the last year.

"They were set an almost impossible task, which they handled with dignity and determination. For that, we are all hugely grateful to both of them."

Budge said that they felt they needed someone of Levein's experience to develop a long-term strategy.

"Craig Levein will join the club with immediate effect and will assume total responsibility for everything to do with the playing side of the business," she said.

"He will be responsible for putting in place an end-to-end strategy for how we are going to implement a youth-driven playing policy within the club.

"These decisions have been driven by everything that has been said about needing a long-term strategy, built over a three-to-five-year planning horizon.

"For those reasons, the new board believes that we need to bring in someone with Craig's experience to guide that vision."

John Murray will return to his former role as chief scout and will assist in running the club's academy, but Budge said that Hearts would be looking for someone to run the youth set-up.

"With such a strong director of football on board, we feel we have to spend our limited resources on strengthening and building the coaching side of the business, rather than having a first-team manager," she explained.

"Robbie Neilson will take over as head coach for the first team and we will bring in a strong support team to work with Robbie in terms of an assistant coach and under-20s coach.

"Over the next few days, a number of other changes will be announced as we start the process of rebuilding our great club."

The three experienced players were a result of Hearts' decision to concentrate on developing their young talent.

"We will have to say good-bye to a number of the fans' current favourites; we will do our best to secure all our excellent young players; and we will welcome a group of new players, who will help us achieve our vision," added Budge.

"A number of the decisions we make over the next few days and weeks will be driven by finance.

"We have to ensure we live within our means. All of the decisions have been taken with a view to ensuring the future stability of our club."