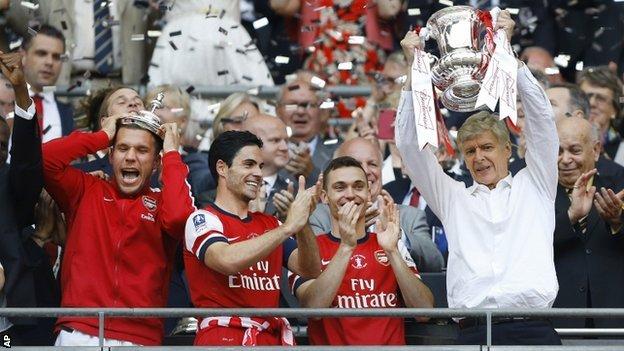 Aaron Ramsey's extra-time winner ensured Arsenal ended their nine-year wait for a trophy as they came from two goals behind to beat Hull City in a dramatic FA Cup final at Wembley.

The Gunners started as firm favourites but were stunned as goals from James Chester and Curtis Davies gave Hull a flying start inside the first eight minutes.

"Arsene Wenger is a winner again. Arsenal are winners again after 120 dramatic minutes that forced manager, players and fans through so many of the experiences they have shared in recent years - only this time with a happy ending.

"Wenger has every right to celebrate this success but he must not - and surely will not - believe that this means Arsenal do not still require serious investment."

Santi Cazorla's superb free-kick put Arsenal back in contention before half-time and Laurent Koscielny scrambled in the equaliser after 71 minutes.

And as Arsenal looked the stronger, superior team in extra time, Ramsey, whose absence through injury hit them so hard in the latter part of the season, completed the comeback with an instinctive strike with 11 minutes of the extra period left.

Arsenal survived anxious moments as Hull pressed forward in desperation - but referee Lee Probert's final whistle signalled the end of the agonising 3,283-day wait for manager Arsene Wenger to taste success after they won the FA Cup against Manchester United on penalties in Cardiff in 2005.

Hull ran out of steam after that lightning start but boss Steve Bruce can still be proud of a magnificent effort by his players, who also excelled to secure Premier League status for next season.

For Wenger, this triumph will be received with a mixture of celebration and relief as he won the FA Cup for the fifth time in his career - and demonstrated that he can still bring silverware to a club that has gone through a long, barren spell after so much glory early in his reign.

Even after securing a place in the Champions League for the 17th successive season, serious questions would have been asked of Wenger and his players had they failed to see off the challenge of underdogs Hull.

Now, with the burden lifted from his shoulders, Wenger will believe this can be a new start for Arsenal after the fright of those opening minutes when it looked like a trophy might escape them again.

Arsenal were left bewildered as Hull delivered two heavy blows inside the first eight minutes to stun the Gunners and their expectant supporters.

Hull deserve great credit for a set-piece move that caught Arsenal by surprise as Stephen Quinn found Tom Huddlestone unmarked on the edge of the area. His shot was going off target but Chester was alert enough to redirect it past the wrong-footed Arsenal keeper Lukasz Fabianski.

It got better for Hull - and considerably worse for Arsenal - five minutes later when Alex Bruce's header came back off the post and Davies was perfectly placed to beat Fabianski with an angled finish.

There was a mood of utter disbelief among Arsenal's players and fans, in sharp contrast to the other end of Wembley, where Hull's fans were in dreamland.

And as Arsenal struggled to recover some semblance of composure, it required a vital goal-line clearance from Kieran Gibbs to divert away another header from Bruce.

Arsenal needed to find hope from somewhere and it came after 17 minutes when Cazorla curled a brilliant free-kick beyond the outstretched hand of Hull keeper Allan McGregor.

Hull were now being tested by Arsenal but they held firm and Wenger was forced into a change after an hour when Yaya Sanogo replaced Lukas Podolski.

The pressure was building and the equaliser came with 19 minutes left, coming from a corner which Hull disputed bitterly after Sanogo appeared to turn the ball out at the near post.

Hull, however, switched off at the corner and when Bacary Sagna's header deflected off Olivier Giroud, Koscielny was first to react to turn the finish past McGregor from six yards.

Bruce sent on Sone Aluko for Quinn in an attempt to galvanise his side but it was all Arsenal as Hull hung on desperately.

Gibbs was guilty of wasting a glorious chance when he was set up by Sanogo, taking his time before shooting wildly over from eight yards. McGregor then did well to save from Giroud as the striker finally threatened.

Sanogo's unpredictable presence had made an impact and he was inches away from winning it for Arsenal in the closing moments of normal time with a shot from the edge of the area.

Hull looked physically spent as extra time started and came close again five minutes after the restart when Giroud rose to meet Aaron Ramsey's cross but headed against the bar.

Arsenal were really exerting their authority and it was no surprise when Ramsey finally broke Hull's resistance after 108 minutes with a smart first-time finish inside the area from Giroud's clever, instinctive back-heel.

There was one final scare when Fabianski's ill-judged dash from goal saw Aluko's effort from wide roll across the face of goal to safety - but seconds later the years of hurt were over for Arsenal and Wenger.