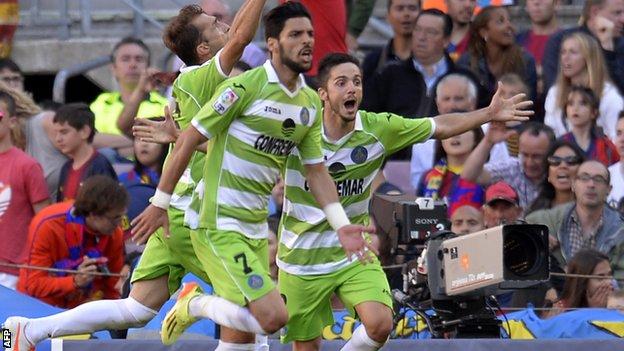 Barcelona's title hopes suffered a major setback as a late Getafe goal earned them a draw at the Nou Camp.

Champions Barca, who paid tribute to ex-manager Tito Vilanova before kick-off, are three points behind leaders Atletico Madrid, who face Levante on Sunday, having played a game more.

Lionel Messi put the hosts ahead before Angel Lafita equalised for Getafe.

Alexis Sanchez put Barcelona back in front but Lafita scored his second in stoppage time to stun the home crowd.

Barca's first home match since Vilanova's death on April 25 was preceded by a minute's silence, while the players' shirts carried a tribute to their former coach.

Once the game got under way, Messi scored his 28th league goal of the season on 23 minutes, hammering a left-footed shot into the roof of the net following Dani Alves's cross.

But relegation-threatened Getafe levelled on 37 minutes when Lafita fired past Jose Manuel Pinto after Pablo Sarabia scooped a free-kick into the area.

The hosts went back in front on 67 minutes as Cesc Fabregas's blocked shot fell to Sanchez, who drilled into the bottom corner.

Messi had a golden chance to seal the victory but his lofted shot drifted over the crossbar, before Sarabia volleyed straight at Pinto at the other end.

Getafe found their equaliser, though, as Lafita thumped a header past Pinto with seconds of injury time remaining to all but extinguish Barca's title hopes.