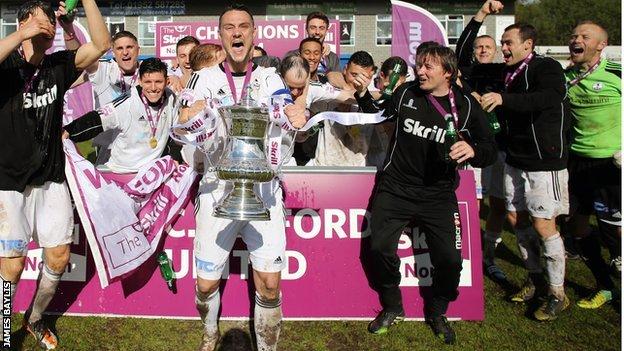 Young, 34, has strong family ties with the Isle of Wight, over 200 miles away.

And his decision to move there recently must leave his future with the Shropshire club in doubt.

"I had the chance to leave last year and go to a league club. But I wanted to stay and get us back to where we belong," he told BBC Radio Shropshire.

Last title triumph for the Bucks

"Now I feel I've done that, my contract runs out soon, I'm 34 years old, I'm not getting any younger and I have to think about my family.

"I have to sit down and speak to the manager [Liam Watson]. Does he want me? And then we will work it out.

"If that was my last game, then I'll be leaving on the best possible terms."

Young, who was part of the Hednesford side which won the FA Trophy in 2004, made his Telford debut in August 2007, joining the reformed club on the back of two promotions in three years from the Northern Premier League.

He has twice helped the Bucks win promotion to the top tier of English non-league football, having also kept goal in the team that won promotion from the same level under Andy Sinton in 2011.

Young was offered a move elsewhere a year ago, following Telford's record-breaking relegation from the Conference Premier.

But he stayed to help Telford win promotion, clinched on the last day on Saturday with a 3-0 win over Gainsborough Trinity, having conceded 53 goals in 42 games.