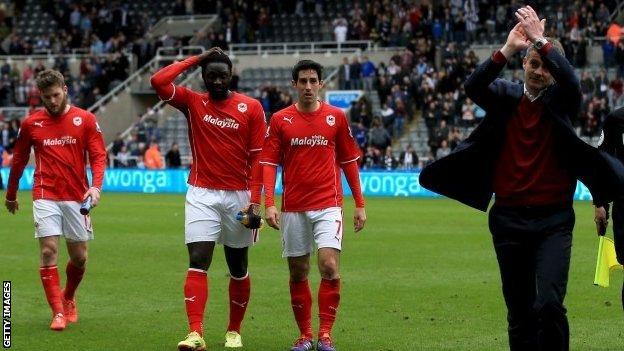 Cardiff have been relegated from the Premier League after a single season, with defeat at Newcastle sending the Welsh side back to the Championship.

Newcastle, who had lost their previous six games, took the lead through Shola Ameobi's first-half header.

A sizeable number of Magpies fans walked out after 69 minutes in protest at the running of the club.

They missed a brief rally from Cardiff before late goals from Loic Remy and Steven Taylor sealed their fate.

Newcastle's rotten recent form was partly behind the open mutiny from their fans, but the supporters who stayed until the end were able to celebrate what turned out to be a comfortable victory.

Cardiff boss Ole Gunnar Solskjaer won 2-1 at St James' Park in his first game in charge of the Bluebirds - an FA Cup tie in January - but his side never seriously looked capable of staging a repeat.

Solskjaer has picked up just 12 points in his 17 league matches in charge and his side's deficiencies at both ends of the pitch were clear to see.

Fraizer Campbell missed a good early chance to put the visitors ahead, scuffing his shot wide after Tim Krul made a hash of Fabio's cross.

But Newcastle were already looking far more dangerous, with Moussa Sissoko and Mathieu Debuchy facing little resistance as they staged repeated raids down the right.

Remy saw one effort blocked from a Sissoko cross, before Debuchy advanced from right-back and flashed in a shot that David Marshall pushed away.

Cardiff have kept only seven clean sheets in 37 top-flight games this season, the lowest number in the Premier League. The Bluebirds have had problems in attack too - failing to score in 19 of those games.

From the resulting corner, Debuchy saw Marshall claw his header onto the bar but there was no stopping Ameobi's far-post header after more good work by Sissoko.

The French midfielder made his side's first goal with a precise cross and twice almost extended their lead, seeing first a shot and then a cross deflected against the woodwork.

Cardiff's best hope of a reply seemed to lie with Wilfried Zaha but the on-loan Manchester United forward was denied by Krul's outstretched leg after a mazy run and faded after the break.

In truth, there was little fight from Zaha's team-mates either and Cardiff looked like dropping out of the top-flight with a whimper until Kenwyne Jones came off the bench with 17 minutes to go.

By then, with their relegation rivals Sunderland leading Manchester United at Old Trafford, the Bluebirds needed a win to keep their survival hopes alive until the final day.

Jones had an immediate impact, forcing a point-blank stop from Krul, but Cardiff's frustration continued when Fabricio Coloccini somehow cleared Aron Gunnarsson's shot off the line with his keeper beaten.

Many home fans had already departed by then, after another public display of displeasure against club owner, Mike Ashley, and manager Alan Pardew.

Ashley was not present but Pardew, back in the home dug-out for the first time since 1 March after a ban, was given something to smile about before the end.

Remy was left alone to slot home from six yards with three minutes left and Taylor completed the scoring from even closer after Remy's header was saved.

"It is understandable. We had gone so long without winning and they are very frustrated. They want to see us challenging at the top of the league.

"That is difficult with the finances that we have, but we have got the chance in the summer to hopefully to bring in some quality players and try to get into the top five or six.

"We are all frustrated. But I have to take my hat off to the players because the environment was very, very tough for them and they showed tremendous character. It was that depth of character that we needed."