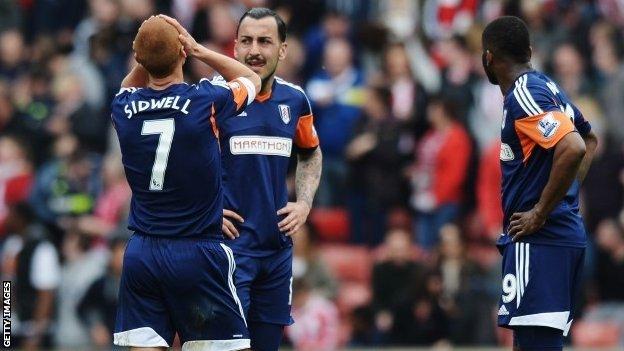 Fulham were relegated after a 13-year stay in the Premier League as they suffered a heavy defeat at Stoke.

Felix Magath's team needed to win to keep alive their hopes of survival, with Sunderland's victory at Manchester United sealing their fate.

Striker Peter Odemwingie tapped in Stoke's first, before Marko Arnautovic and Oussama Assaidi, who were both excellent, made it 3-0 after the break.

The Potters were as dynamic as their visitors were listless.

Apart from Richardson's goal, Stoke keeper Asmir Begovic was barely troubled, and his team-mates must have felt like they were playing a pre-season friendly.

Cottagers supporters will point to a change of ownership, three different managers and an unsettled side as the reasons for their team's struggles this season - but on Saturday, when the circumstances should have served as inspiration, the players simply did not deliver.

Scott Parker was the only Fulham player who rose to the occasion, with fellow midfielder Steve Sidwell failing to provide any drive in attack and striker Darren Bent barely touching the ball.

Magath, who replaced Rene Meulensteen with 12 games remaining, reiterated after the match he wants to remain at Craven Cottage - and his rebuilding task will begin after next week's game against Crystal Palace.

As for Stoke, manager Mark Hughes has made his side as difficult to beat at the Britannia Stadium as they were under predecessor Tony Pulis. This was their 10th home league win of the season, a record only bettered by the top five.

Hughes's Stoke arguably play more attractive football than Pulis's side did, and in Arnautovic and the on-loan Assaidi they have two brilliant attacking players.

Either side of Odemwingie's opener from a yard, both players forced great saves from Fulham keeper David Stockdale.

All three were involved in Stoke's second. Assaidi passed with the outside of his boot down the left wing before Odemwingie squared the ball for Arnautovic to slam high into the roof of the net.

The third goal also came from a counter-attack. This time former Blackburn player Steven N'Zonzi found Arnautovic, who unselfishly laid the ball on for Assaidi to convert.

Richardson crashed home a consolation goal for the visiting team before Walters latched onto Charlie Adam's pass, outpaced John Arne Riise and slid in the fourth.