His dismissal was announced shortly after 0830 BST, following a meeting with executive vice-chairman Ed Woodward at the club's training ground.

Moyes, 50, was chosen by Ferguson to succeed him when he retired after 26 years in charge last summer.

United said player-coach Ryan Giggs will take charge "until a permanent appointment can be made".

His first match as interim boss will be the home game against Norwich on Saturday.

The BBC understands coaches Steve Round and Jimmy Lumsden have also left their posts, but goalkeeping coach Chris Woods and first-team coach Phil Neville will remain with the club for the rest of the season.

United shares, which trade on the New York Stock Exchange, were up more than 6.5 per cent at $18.80 at 1830 BST, signalling investor relief at the decision to sack Moyes.

On Monday, United had refused to comment on newspaper reports that Moyes, who left Everton to sign a six-year deal with the Premier League champions, would be sacked before the end of the season.

However, those reports prompted club officials to hold talks with the Scot late on Monday in a move designed to prevent a drawn-out dismissal process.

In a short statement on Tuesday, the club said Moyes had departed, adding it "would like to place on record its thanks for the hard work, honesty and integrity he brought to the role".

However, Klopp has ruled himself out of the job, the 46-year-old telling The Guardian: "Man Utd is a great club and I feel very familiar with their wonderful fans. But my commitment to Borussia Dortmund and the people is not breakable."

Former Manchester United and England striker Michael Owen said on Twitter: "Huge news at Old Trafford but with the summer looming and a huge transfer kitty available United had to be 100% Moyes was the right man.

"Evidently they didn't have the confidence in him in which case makes the timing absolutely right. Now the big question is who's next?"

The Daily Telegraph suggest United will make discreet moves to see if Pep Guardiola can be persuaded to leave Bayern Munich.

But BBC Sport has learned that Giggs is not under consideration for the role on a full-time basis.

"I definitely think Ryan will be a manager," said former United captain Bryan Robson. "Whether he gets it full-time at a club like Manchester United is a big ask."

United, who lie seventh in the table with four games remaining, are guaranteed to record their lowest points tally in the Premier League having struggled at Old Trafford in particular this season.

Under Moyes, they have lost six league games at home, been beaten in the FA Cup by Swansea at Old Trafford and were unable to prevent Sunderland defeating them in the Capital One Cup semi-finals.

In March, some supporters chartered a plane to fly overhead during their Premier League game against Aston Villa trailing a banner with the words "Wrong One - Moyes Out", a reference to the banner at Old Trafford that proclaimed Moyes to be the "Chosen One".

United reached the last eight of the Champions League before being knocked out by Bayern Munich and Moyes argued that their best displays had been in the competition.

But the Scot has been dogged by claims he has fallen out with members of his squad.

When midfielder Anderson joined Serie A side Fiorentina on loan in January, he was quoted as saying other United players "wanted out" although he later denied it.

The sacking of Moyes was inevitable after Sunday's awful performance at Everton.

A dressing-room source labelled the performance as "lacking desire and passion" and "the basic heart of the team has disappeared". It had seemed for some time the players had stopped trying for Moyes. This confirmed it.

In truth, the Scot has never looked at ease in the job. He was taken aback by the sheer scale of the media interest in United and failed to impress players who own more medals than he can ever hope to amass.

The big problem for United is that, having taken Sir Alex Ferguson's word on the appointment, who do they turn to now?

At the weekend, Manchester-born striker Danny Welbeck was reported to be considering his future after becoming frustrated at regularly being played out of his favoured position.

Moyes left Everton after 11 seasons saying he could not turn down the opportunity to move to Old Trafford and began his job on 1 July.

However, United endured a difficult summer transfer window and failed in reported bids for Barcelona's Thiago Alcantara and Cesc Fabregas.

A double bid for Marouane Fellaini and Leighton Baines was dismissed as "derisory and insulting" by Moyes's old club Everton, although Fellaini finally joined on transfer deadline day for £27.5m.

Moyes was unhappy United were given a difficult start to the season, playing Chelsea, Liverpool and Manchester City in their first five games.

"I find it hard to believe that's the way the balls came out of the bag, that's for sure," he said.

But his reign began in style with a 2-0 victory over Wigan Athletic in the Community Shield at Wembley, followed by a 4-1 win away at Swansea City in the first league game of the season.

However, things quickly got worse with defeats at Anfield and Etihad Stadium, setting the tone for what would become United's worst Premier League season. 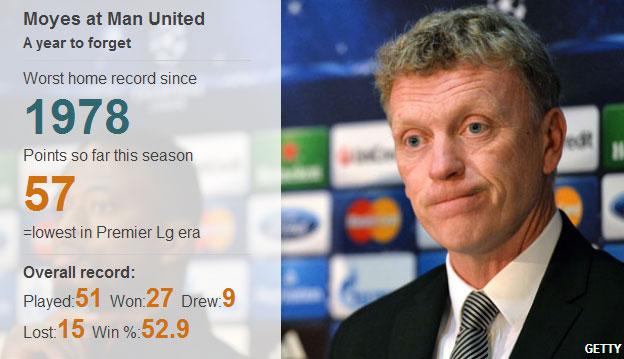 With the exception of the additional 21 games Matt Busby (manager from 1945-1969) had in charge as emergency manager following Wilf McGuinness's exit in 1970, and the 22 games when Jimmy Murphy stood in for Busby after the Munich air crash, Moyes's reign represents the third shortest in United history.

It is also the first time since 6 November 1986 that Manchester United have sacked a manager.

The Scot's 51 games in charge exceeds the 43 matches that Walter Crickmer presided over during the first of two spells as manager.

Lal Hilditch was in charge for the shortest time, lasting just 33 games between October 1926 and April 1927.