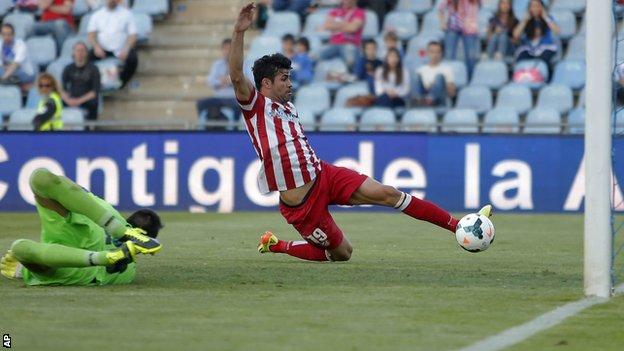 Atletico Madrid's charge towards a first Spanish title since 1996 shows no sign of faltering after Diego Simeone's men earned a vital win at Getafe.

Atletico striker Diego Costa has missed a joint-high three penalties in La Liga this season, along with Sevilla's Ivan Rakitic.

But Costa made amends by sliding in a late second from Adrian's cross.

However, the Spain striker's bravery in wrapping up victory at the far post came at a bloody price.

The Atletico top scorer, on his return from a recent thigh injury, was carried off on a stretcher with a deep gash below his left knee after colliding with the woodwork as he converted his 26th goal of the season.

The nasty incident left Simeone looking concerned on the touchline but the Atletico boss revealed afterwards that it was not as serious as first feared.

"Diego is fine. We don't need to worry, it was just a scare," said the former Argentina international, who expects 25-year-old Costa to be fit to face Elche on Friday.

And, importantly, it means a routine win for the visitors was not ruined ahead of a thrilling La Liga and Champions League climax.

Before the start of the season, few would have predicted Atletico could break up the Spanish duopoly of Real and Barcelona but, with five matches left, the destination of the La Liga crown stays in their own hands.

They have won their last seven games to take control of an enthralling Spanish title race and know victories in their next four matches will see Simeone's men lift the title, making the tantalising final-day trip to third-placed Barcelona irrelevant.

And there is still a possibility of an unlikely double with a Champions League semi-final against Chelsea looming later this month.

Much of Atletico's success has been based on defensive stability, added to the threat posed in front of goal by Costa, and this was again the basis for their victory against Madrid rivals Getafe.

Adrian looked certain to add a second shortly after replacing David Villa, but he was wrestled to the floor by Lafita inside the Getafe six-yard box.

The home midfielder was dismissed for the challenge but Codina produced a terrific one-handed save low to his left to stop Costa's penalty, before the striker slid in a painful second for both him and Getafe.