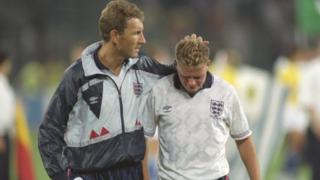 BBC Sport remembers Paul Gascoigne's tears at the 1990 World Cup, after he received a booking in England's semi-final against West Germany which would have ruled him out of the final if his side had got there.

Gazza's tears captured the hearts of many England fans both in the stadium and back home, though England went on to lose the match on penalties.