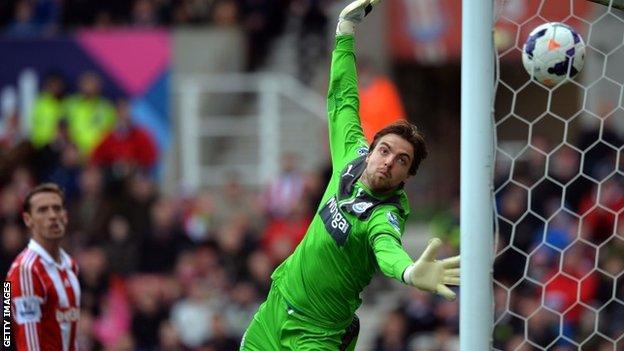 Erik Pieters's fluke goal earned Stoke their fourth win in five league games at the expense of a lacklustre Newcastle.

The Dutch defender scored for the first time in the Premier League when his intended cross from the left drifted over the head of Tim Krul and found the goalkeeper's top left-hand corner.

Stoke also went close through Peter Crouch, whose shot came off a post.

Newcastle's Vurnon Anita headed over from three yards late in the game.

But a draw would have been unfair on the home side, who showed plenty of intent and conviction throughout, while the Magpies only threatened in the last five minutes.

Stoke's latest win at the Britannia Stadium - their fourth in succession - means they are now only three points behind the ninth-placed Magpies.

It was a different story when the teams met on Boxing Day, Newcastle's 5-1 victory against the nine-man Potters putting them sixth in the table and 12 points clear of their vanquished opponents.

But having since secured their Premier League future and seemingly fulfilled owner Mike Ashley's directive of finishing in the top 10, Newcastle have stalled.

Stoke are also safe, but manager Mark Hughes is not allowing his men to relax.

And they should have won this game by more than one goal; striker Crouch hit an upright from four yards, headed over from similar range and then had a diving header clasped easily by Krul.

Midfielder Steven N'Zonzi also went close when his goalbound shot was deflected over the bar by centre-back Fabricio Coloccini.

The Potters did, however, find a way through three minutes before the break, thanks to a large slice of fortune.

Pieters, who along with Marko Arnautovic caused Newcastle problems on the left, looked to find Crouch with a deep cross but instead saw his wind-assisted delivery float into the far corner.