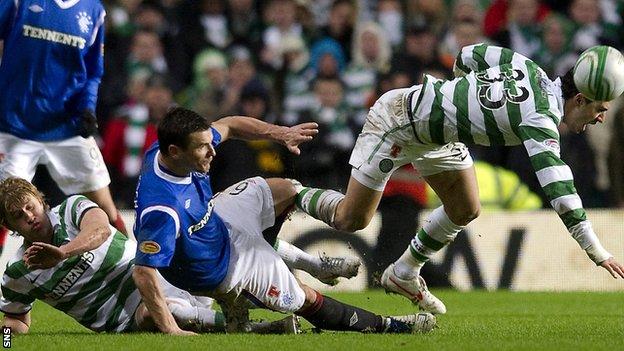 Ally McCoist insists Rangers captain Lee McCulloch is "not a dirty player" following comments by Celtic's Beram Kayal about a tackle in a 2011 match.

Kayal was injured after a McCulloch challenge in a game at Celtic Park.

And Kayal was quoted in an Israeli newspaper as saying: "That player is not the cleanest in the world."

But manager McCoist responded: "I can't even remember the tackle or the incident. I defend my player and my skipper against comments like that."

Kayal, who has been with Celtic since 2010, spent several months on the sidelines following the injury picked up in the December 2011 Glasgow derby.

But McCoist insists the physicality of Rangers-Celtic meetings in the distant past far outweighed more recent encounters.

"With the greatest respect to Kayal, I would have the Old Firm games down as quite tame in comparison to some of the previous Old Firm games," said the manager.

"I am not sure he would have enjoyed playing with Bertie Auld and John Greig in some of those Old Firm games. That would maybe have been a wee eye-opener for him.

"But as I say, I would need to defend my player. He is not a dirty player at all and we are delighted with the skipper, the way he handles himself on and off the park."

Meanwhile, McCoist is hopeful Nicky Law will recover from a back injury in time for Sunday's Ramsdens Cup final against Raith Rovers at Easter Road.

"I am more hopeful about Nicky Law than anyone else," added McCoist. "There are still big doubts over Templeton and Little. They are very doubtful.

"We are going to let Jon and Ian go until the end of the week and we will see how they get on."

"The doctor is in the process of sending results down south, so until we get the opinion back, I can't say any more," added McCoist.

"He has had a very uncommon reaction to a common virus which has affected a lot of muscles in his body and some of the muscles around his heart.

"That said, he is in a better place than where he was three or four weeks ago when he stopped playing.

"There has been an improvement, which is a real plus. It is not a complete shutdown, he has been keeping himself going in the gym, so we are obviously very hopeful."