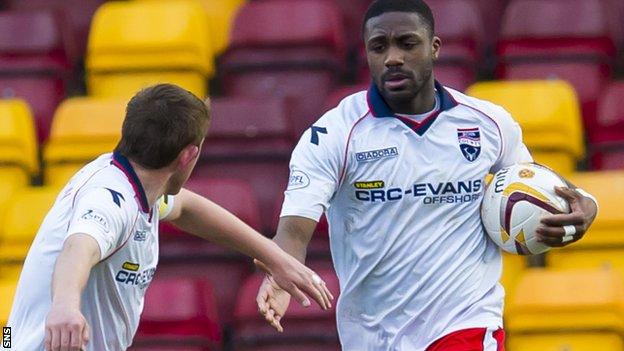 The on-loan Blackburn Rovers defender has yet to make his debut for Cameroon, having been capped at under-20 level, but has designs on featuring in Brazil.

"For me, the first thing is to help Ross County stay in the Premiership," the 22-year-old told BBC Scotland.

"This is a very big club. If I do well at Ross County, maybe I'll get the ticket to the World Cup."

County had gone 10 games without a victory up until the turn of the year, but an influx of January signings, including Songo'o, have led to an improved series of results.

In the last few years, Ross County have improved every year and I think they are going to be regularly in the top six of this league

They still remain in the relegation zone, two points ahead of second bottom St Mirren, but Songo'o is confident they will pull away from trouble.

"This is a very big club and I think they've been unlucky in the first half of the season," he said.

"From January, the team is doing very well. If the season had started in January, we'd be in the top six.

"I'm very surprised at the level at Ross County; I'm impressed with everybody here and want to make sure they don't go down.

"In the last few years, Ross County have improved every year and I think they're going to be regularly in the top six of this league."

Following a fine win away against Johnstone, County were edged out 2-1 by third-top Motherwell at Fir Park at the weekend.

"The team [County] are very confident that they can take nine points from these last three games before the split," said Songo'o.

"The level we played against St Johnstone was unbelievable so the gaffer tells us we should have confidence that we can keep doing it.

"On Saturday, we played good football, but were just unlucky and I think we're ready for the big game against Aberdeen on Tuesday."

Songo'o has not only helped in defence but chipped in with a couple of goals since arriving in Dingwall, the latest in Motherwell.

"All my career, I used to score a couple of goals every season, but my first job is to defend," he added.

"If I can help the team score goals, I will do."